A Day Trip To The West Coast

A Day Trip To The West Coast

About how sometimes you should not listen to the weather forecast

I had just left Tarras, a teeny tiny township in Central Otago where my kiwi family lives, when it struck me that I really didn’t want to go by myself. I had done loads of solo road tripping in the past and this time I just couldn’t be asked. So twenty minutes away from Wanaka I called my friend Ellen who lived in Albert Town at the time, hoping desperately that it was her day off. 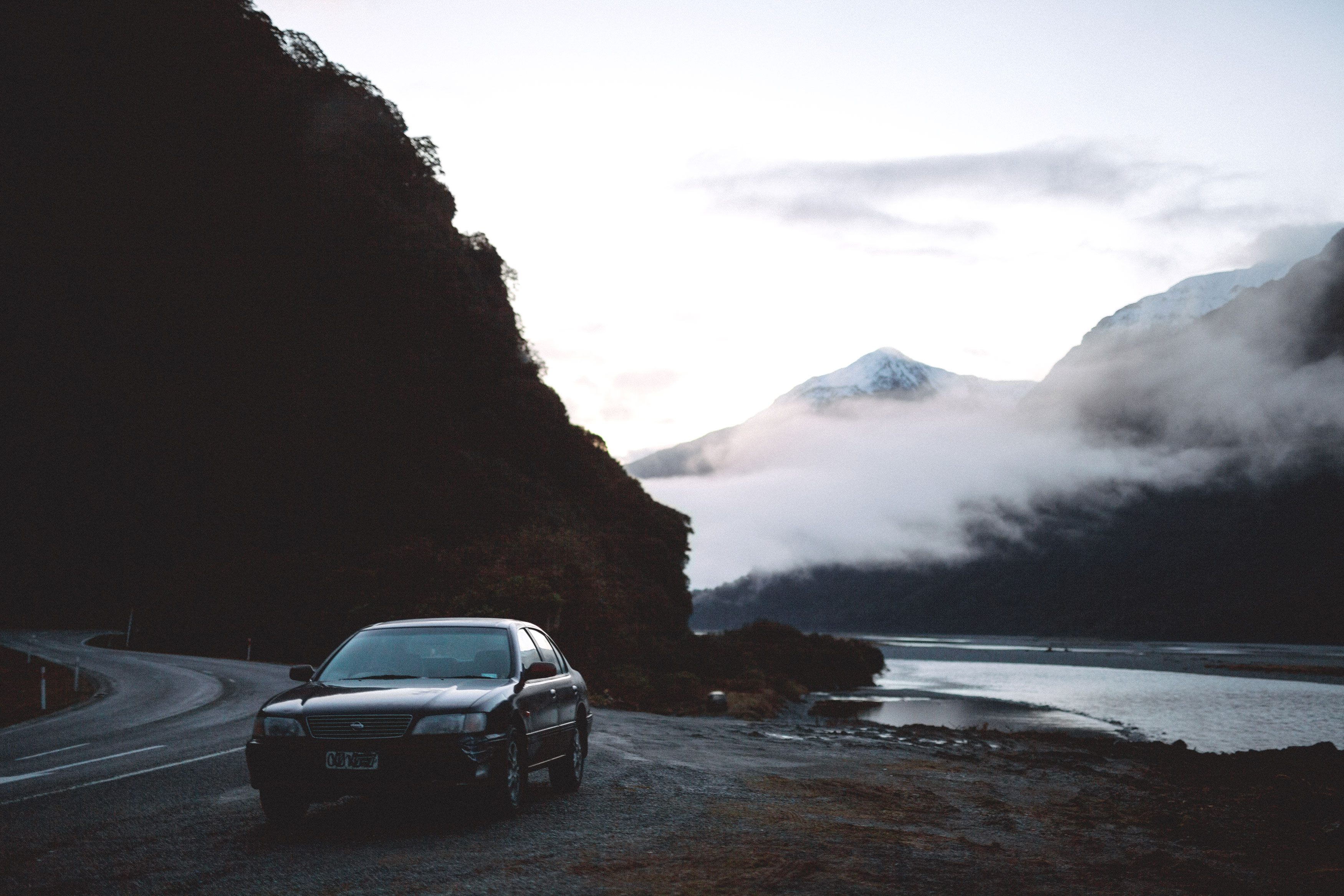 From Wanaka it is about a two hours drive to the West Coast via the Haast Pass, ‚drive‘ being the operative word as the time doesn’t include the stops you’re sure going to make. And I urge you to make time for quite a few stops along the way. There are so many gems it would be a shame to just rush past them (which I had done so many times before, silly me). And all of a sudden two hours turn into three or four hours, depending on how thoroughly you’re exploring every nook and cranny. 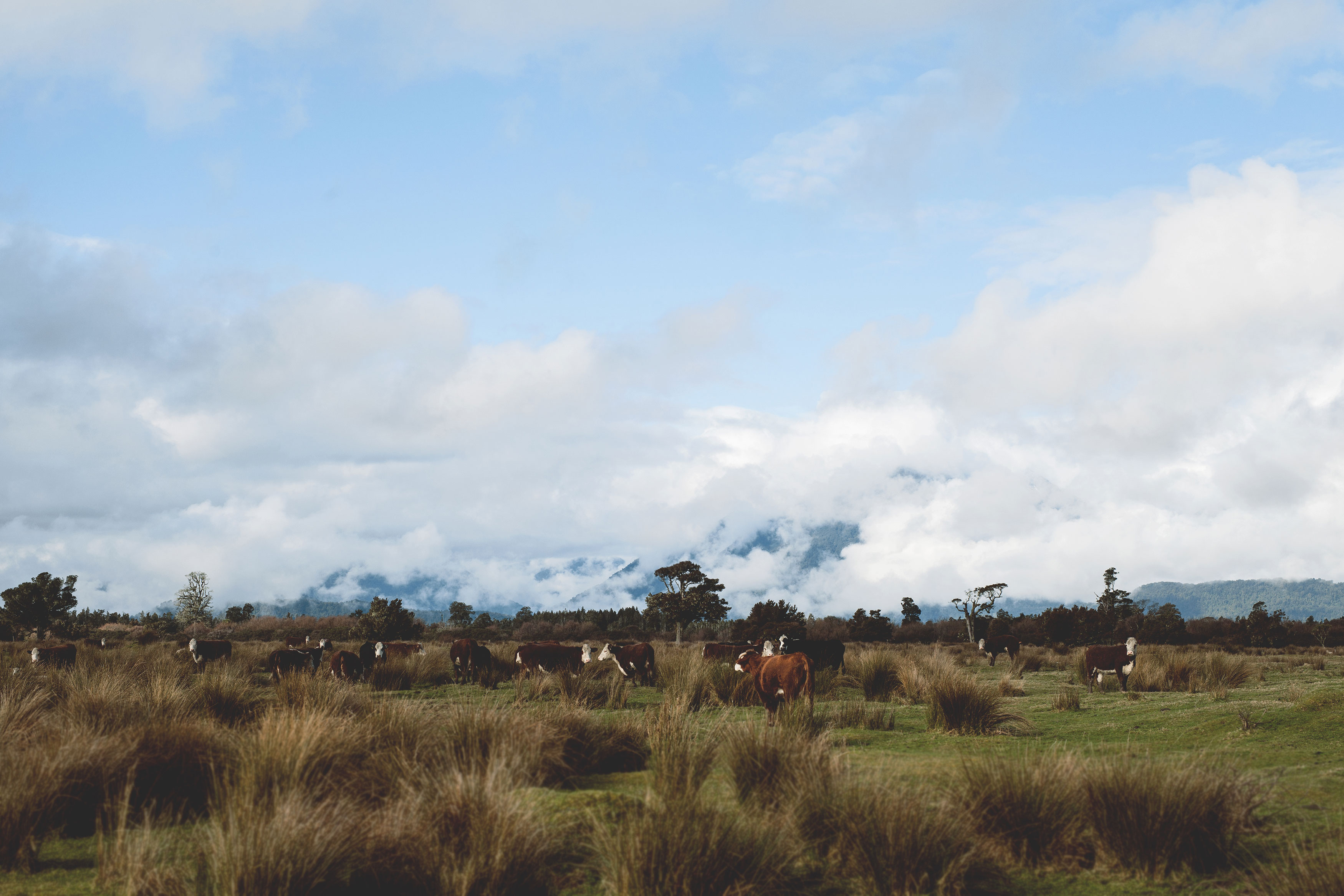 The Haast Pass winds it’s way through Mount Aspiring National Park, New Zealands third-largest National Park. It is home to towering mountains, lush forests, deep valleys, roaring rivers, and an abundance of birds whose song accompanies you everywhere you go.
Ellen and I went at the end of August so the mountains still had a slight touch of Winter’s magic on them. But the further we went into the mountains the moodier it got and soon rain started gently drizzling down. The forecast hadn’t been the best, so no surprise there but we knew better than to be put out by a little rain as the weather can change so so quickly around here. 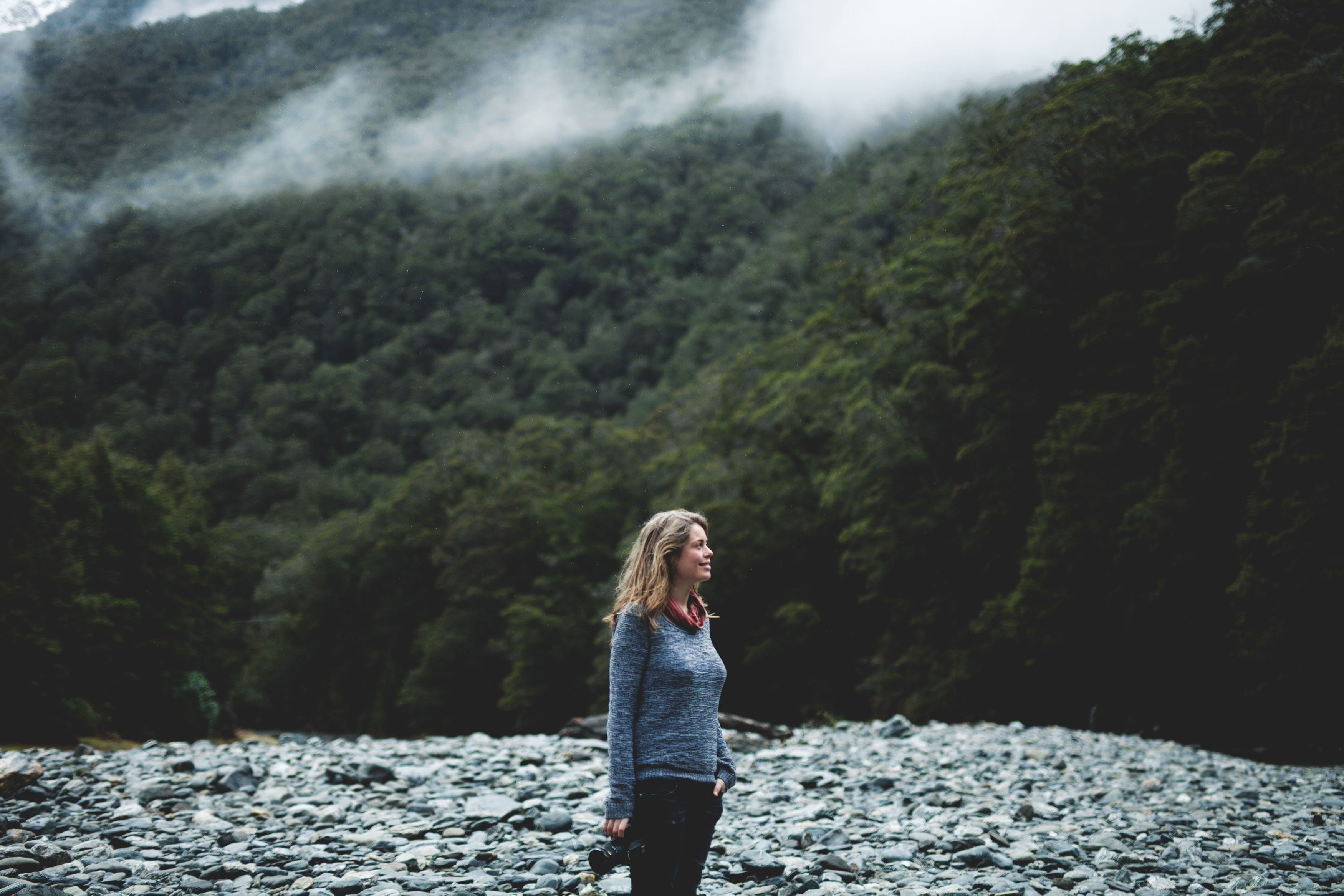 Our first stop was Fantail Falls, about one hour from Wanaka. We parked our car, donned our rain coats and got out into the wet and cold. We followed the short bush walk into the open where we stumbled over the rocky ground until we reached the shores of the Haast River, barring the way to the base of the waterfall. Fantail Falls are named after the little native birds tail which, when expanded looks like a fan (learning something new everyday). 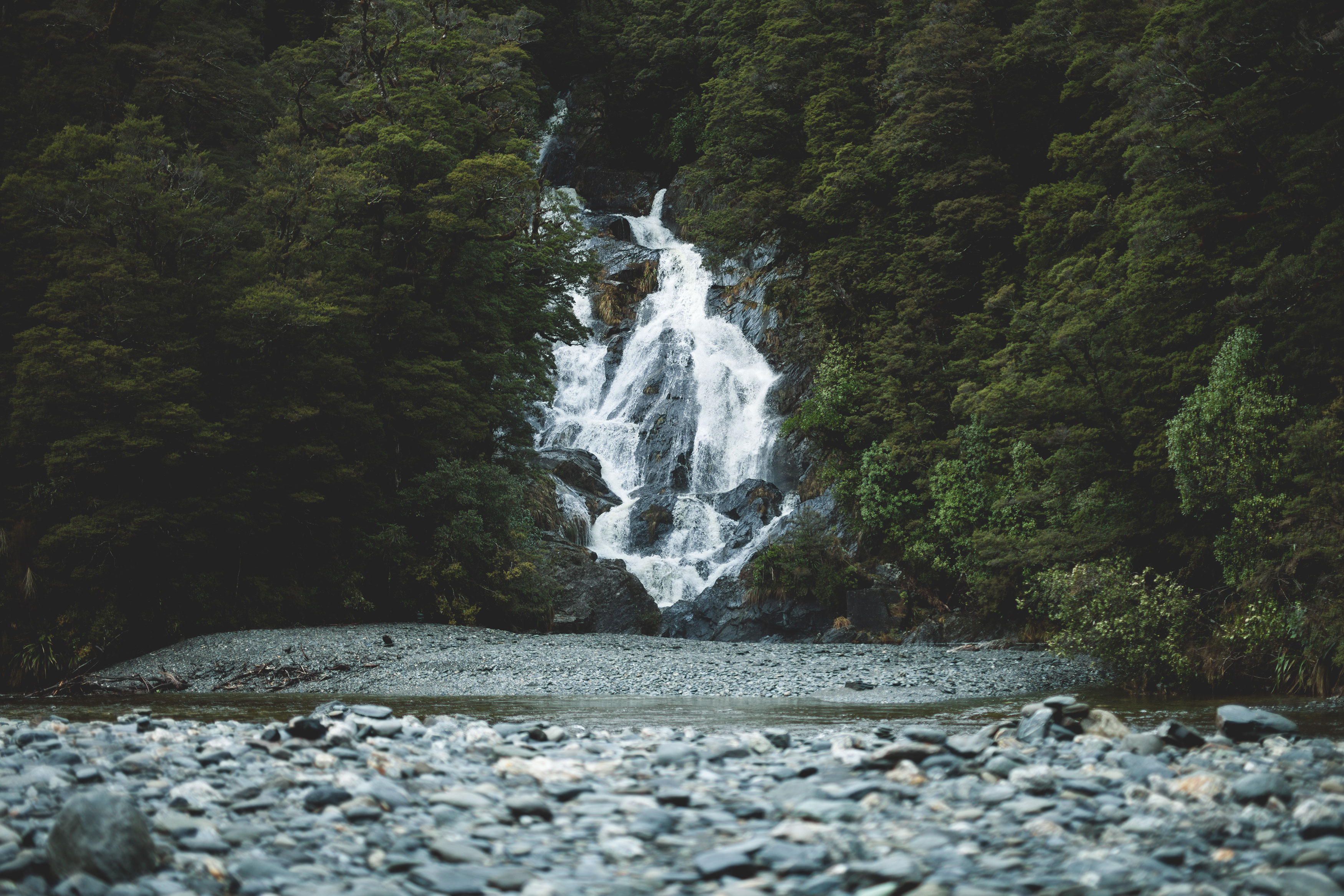 A couple of minutes away from Fantail Falls you can visit Thunder Creek Falls, plummeting 28 metres down a rock face with the Haast River rushing past below it. For the lazy traveller sightseeing is really made easy along the Haast Pass – you’re only ever a short walk away from all the scenic attractions. When we got back to the car the drizzle had turned into more of a downpour. 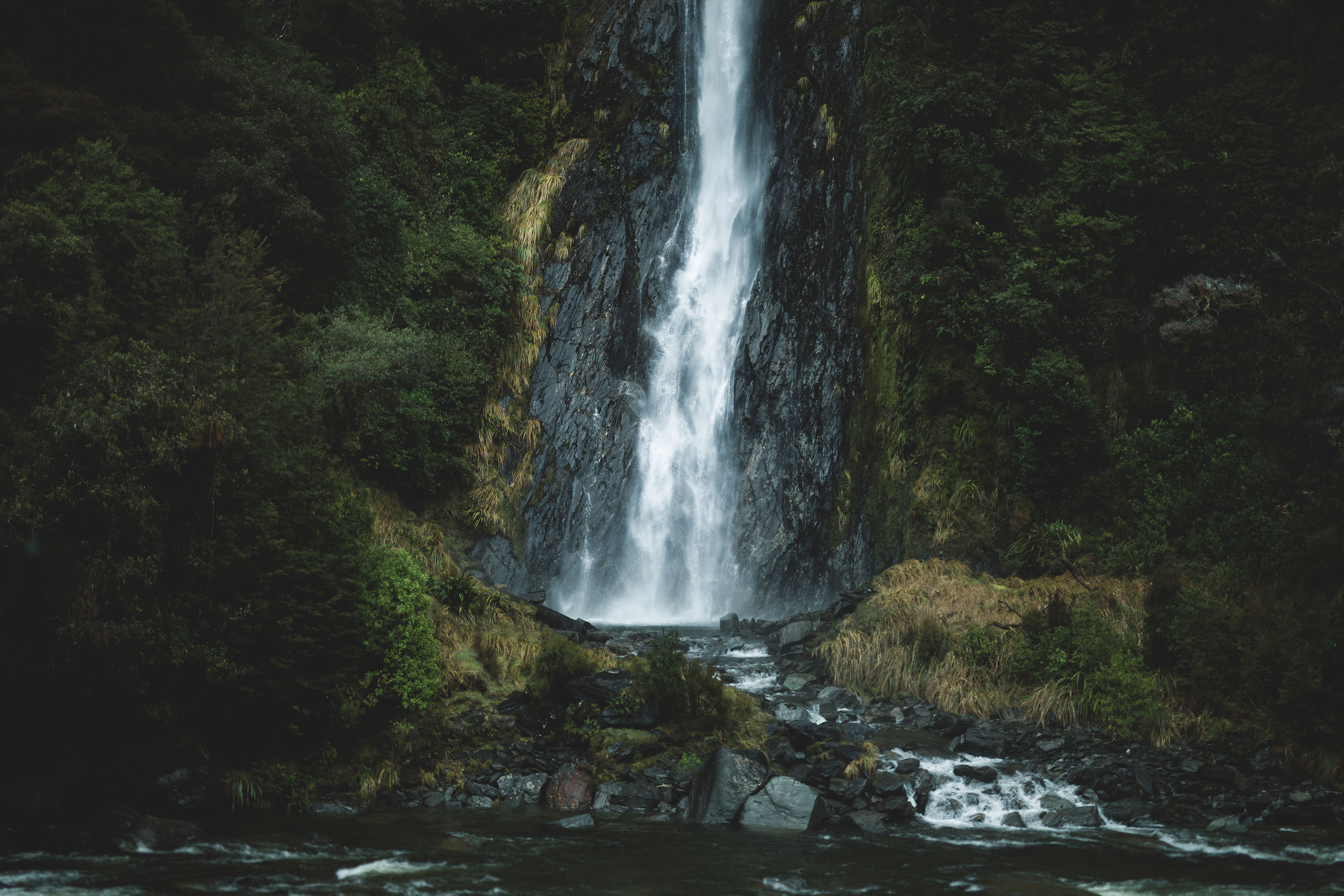 By the time we arrived in Haast we both kind of had enough of the rain and what do you do when something gets on your nerves? Right, you eat something. Because food has the ability to make you feel better so very quickly. So we stopped at a little shop and got some hot, salty chips which we devoured in the car. And all of a sudden, the rain wasn’t too bad anymore.

Next up on our spontaneously made up itinerary was the little fishing village of Jackson Bay which is a 50km ride away from Haast and the main highway. It’s beautifully secluded, with a wharf leading out into the ocean, fishing boats bobbing on the surface of the water and if the weather feels like playing ball you get an awe-inspiring view of the Southern Alps in the distance. So far I haven’t been lucky but I’ll just keep on coming back… 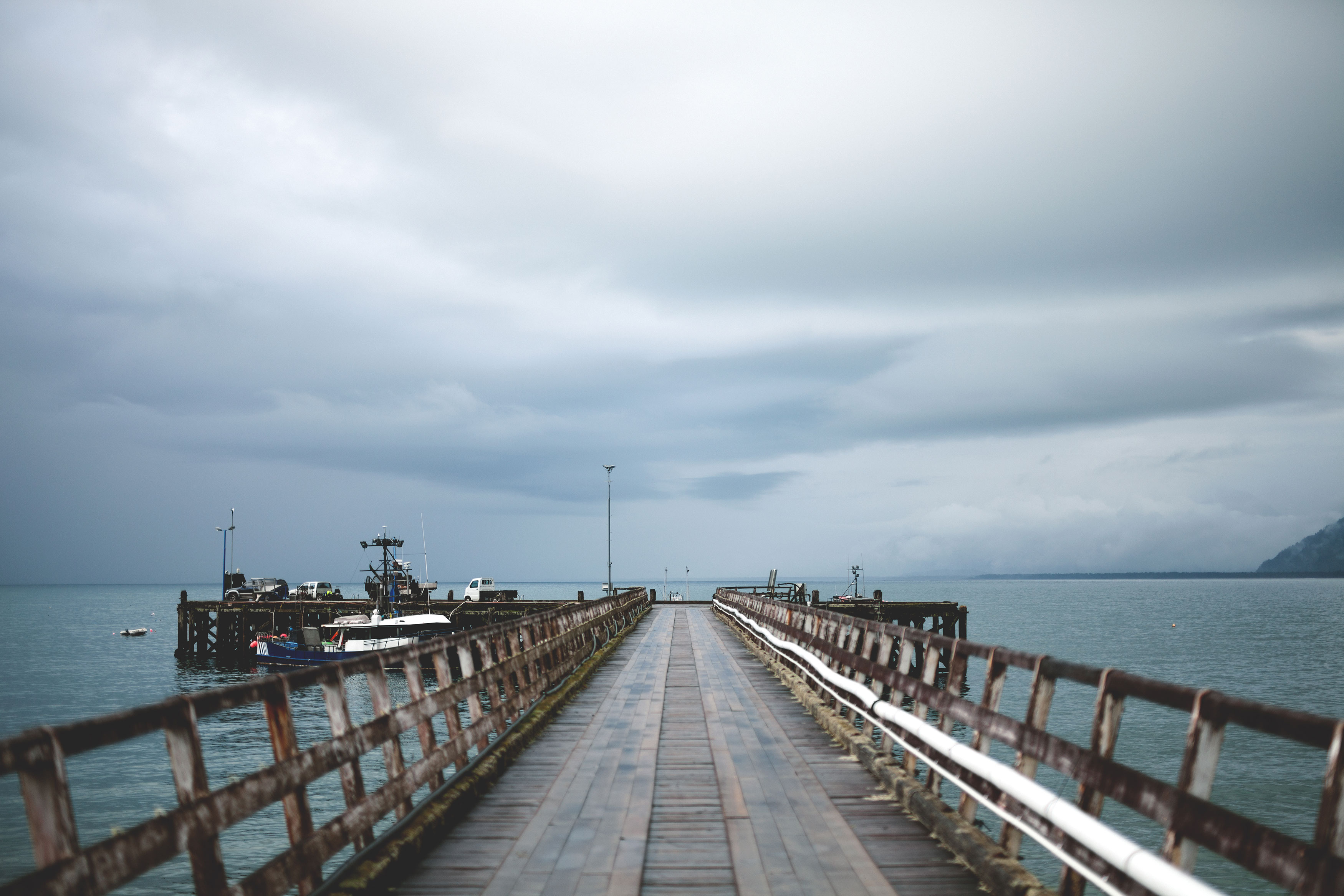 When we got to Jackson Bay the sky had lightened up somewhat and we decided to go for a little stroll which took us to the other side of the bay right towards the sea. We climbed over rocks, marveled at the patterns formed by the waves in all those years, and tried to fight off sand flies.

On the way back towards State Highway 6 the sun finally decided to make an appearance. Driving underneath the sunlit foliage was so beautiful we had to stop our car and get out. The smell of rainforest after rain is so lush and rejuvenating it made us jump around with laughter. 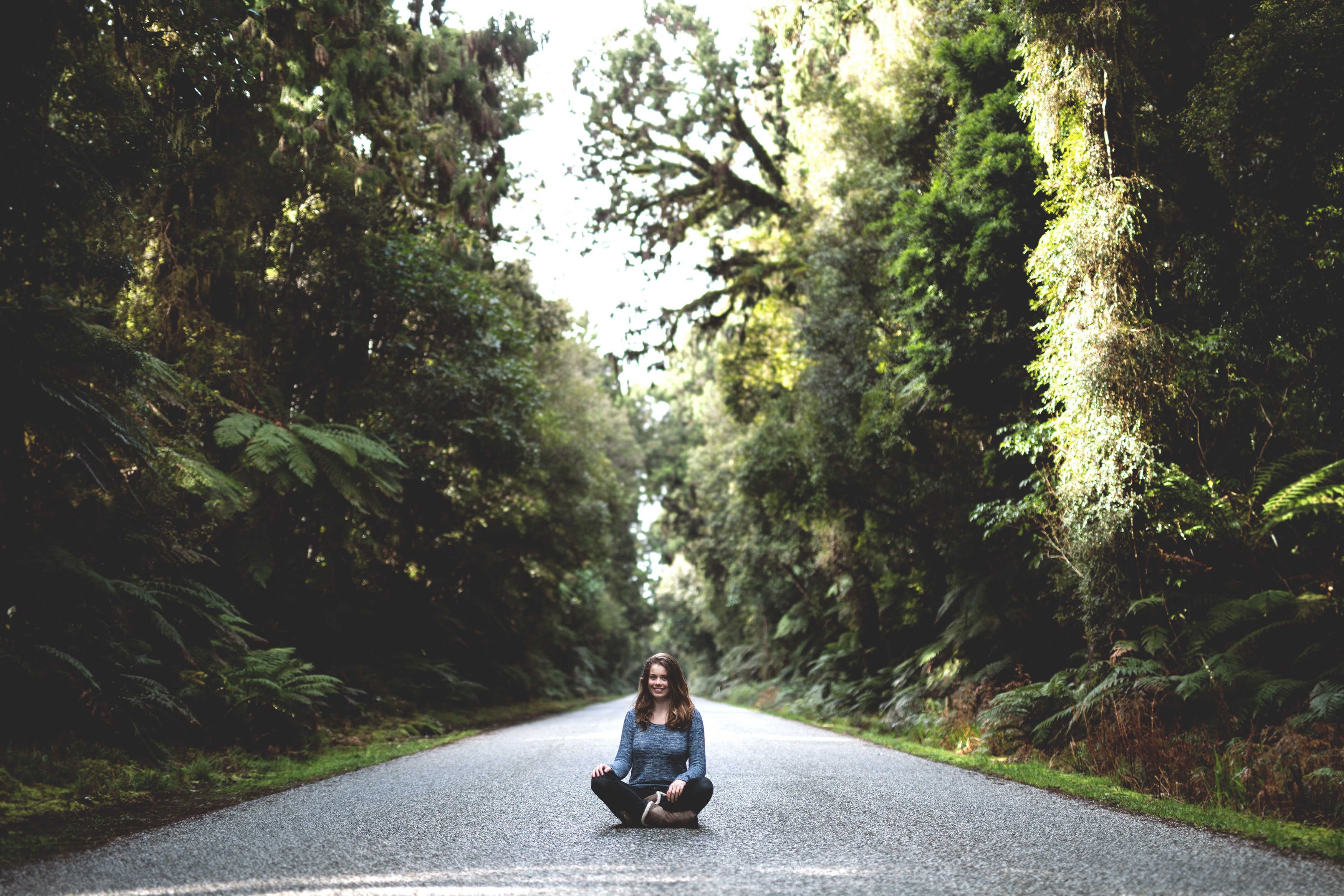 About half an hour later we reached Lake Moeraki which greeted us with a light so magical we couldn’t believe our eyes. The tranquility of the place almost made us want to stop talking aloud and only converse in whispers to not disturb the flora and fauna. 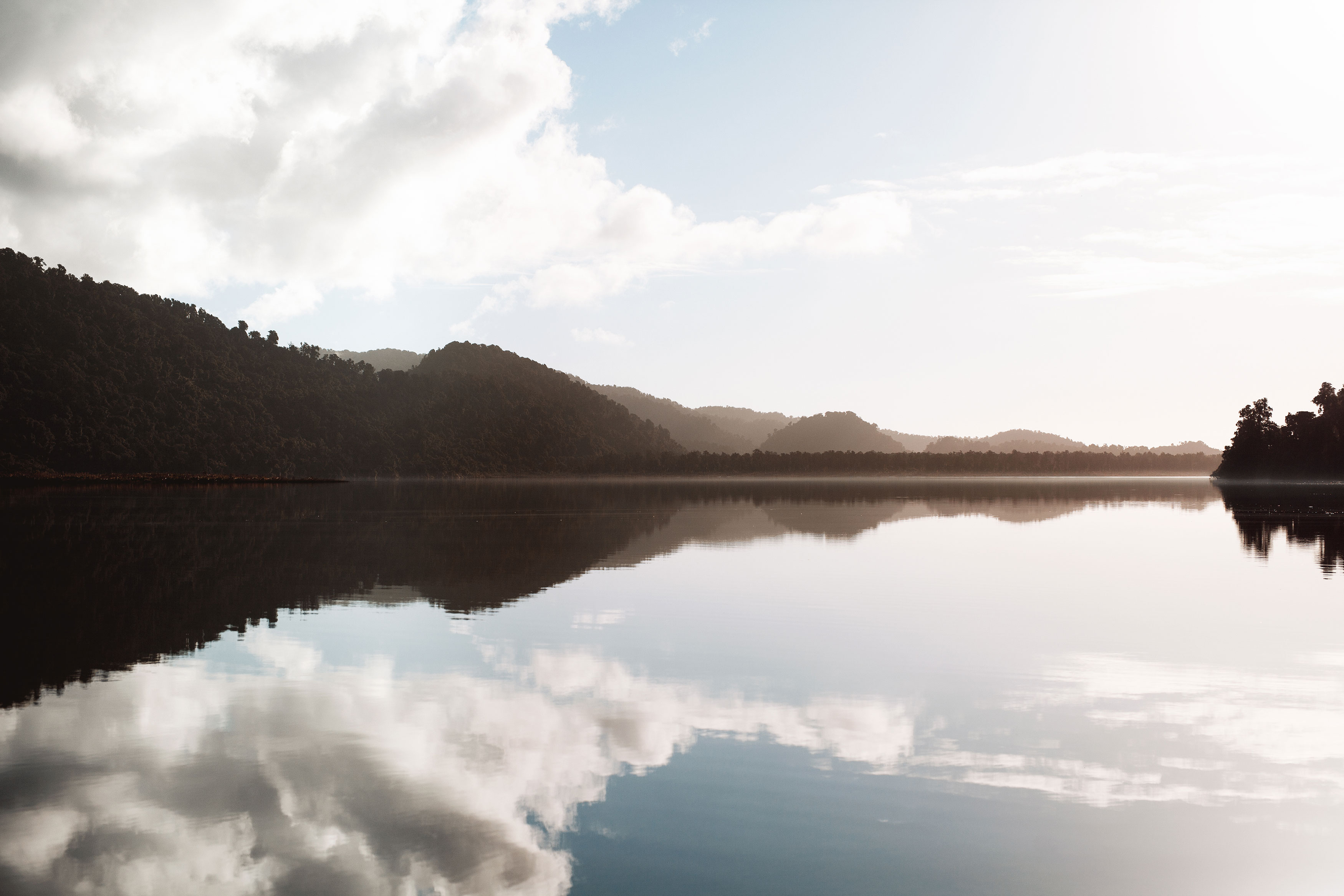 And on we went… a short while later we pulled up at Lake Paringa. The beautiful light being our constant companion now was joined by a blue sky with hardly any clouds. It almost felt like we weren’t at the West Coast anymore because a lot of times you find this part of New Zealand underneath a thick layer of clouds. 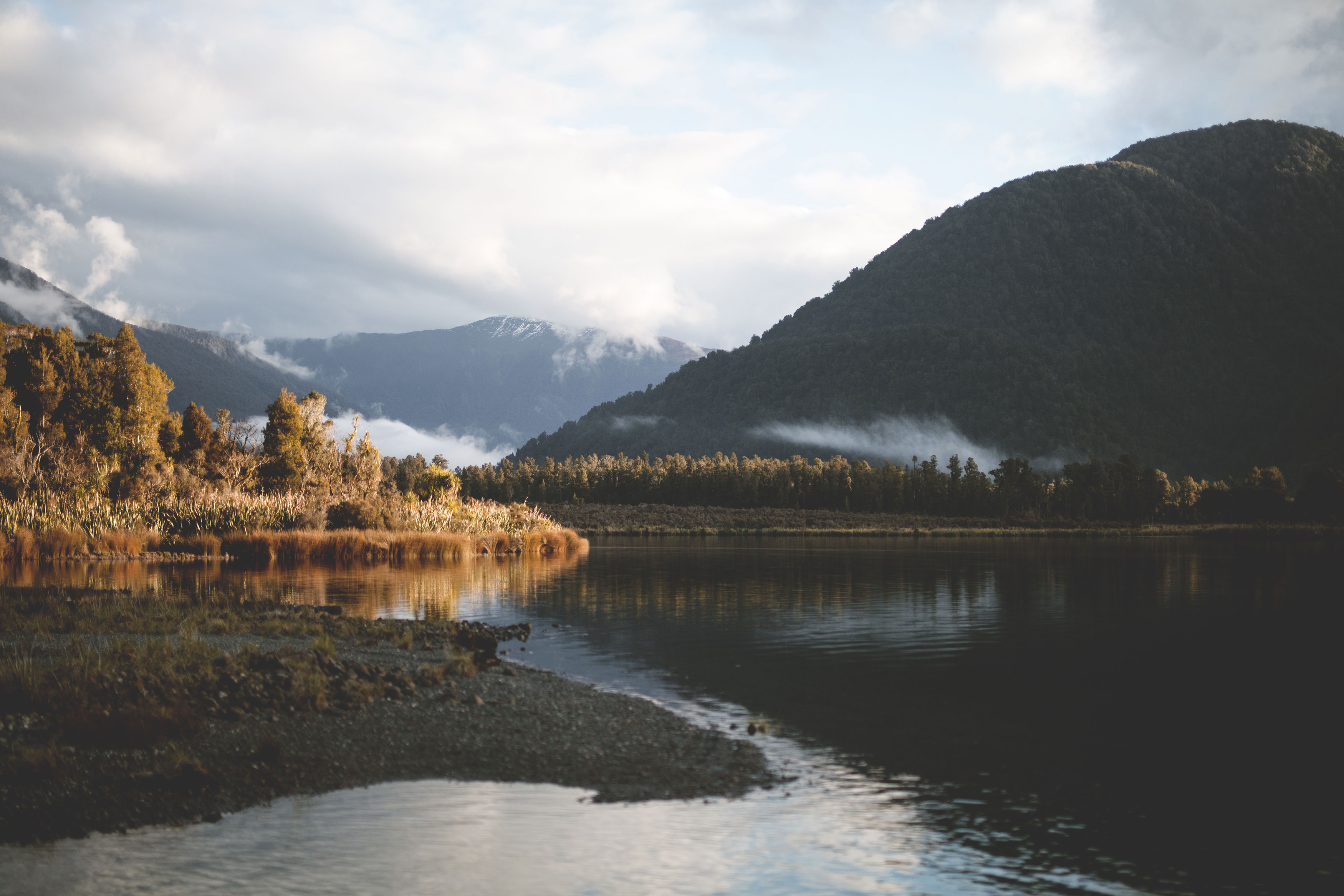 We kept on driving until we reached Knights Point offering wide open views over the Tasman Sea. We had considered driving towards the glaciers but it was already late in the day and the sun wouldn’t have been around for much longer so we called it a day and made our way back towards Otago. But not without a few more stops as some amazing scenes would open up in front of us. 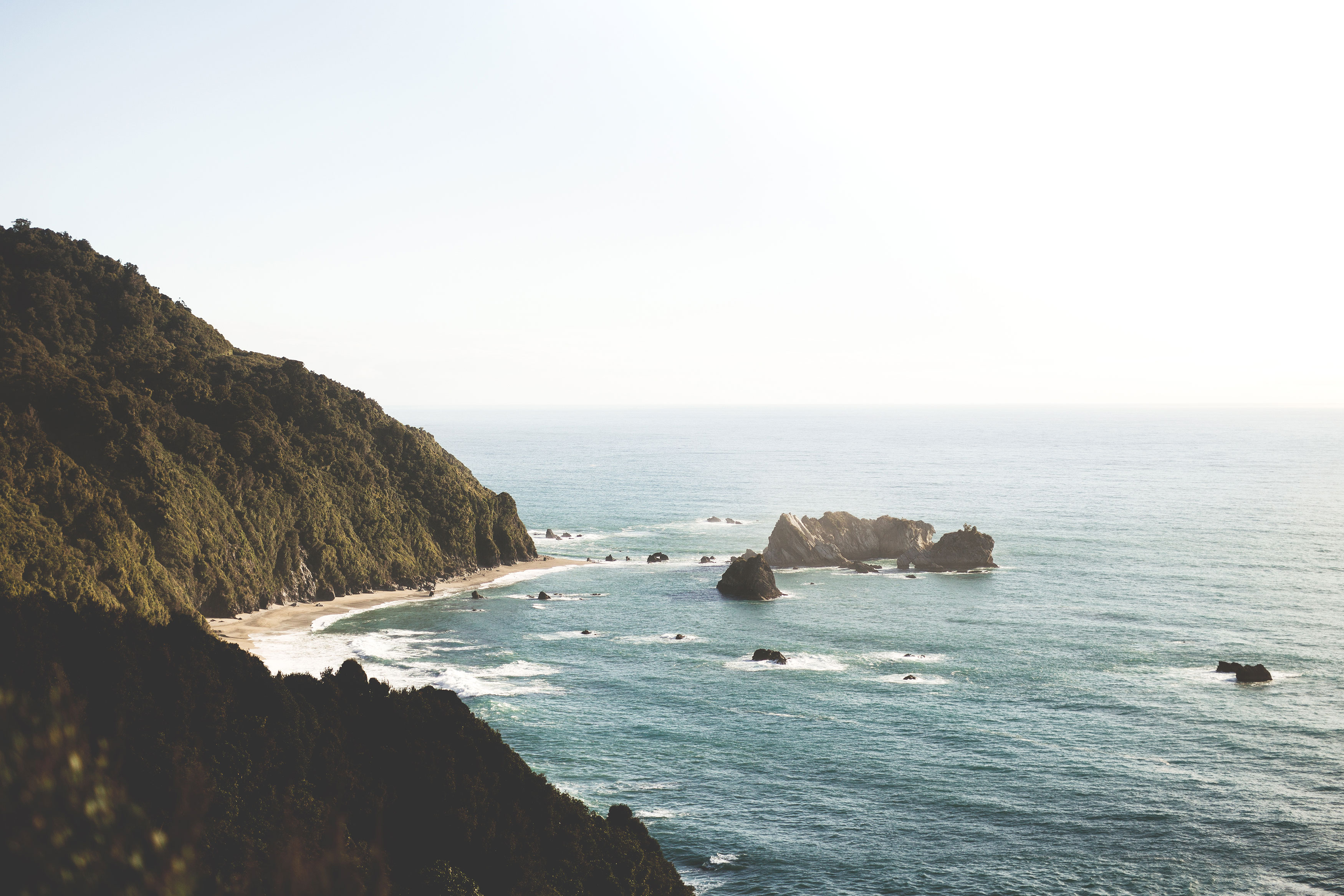 My favourite one was so amazing I’m still struggling to find words as I struggled to find words when we drove down the highway that day back in 2016. We stood there, gaping at the road and the light of the setting sun falling on it and the surrounding landscape. I fell in love with the West Coast before but at that moment it happened all over again.

When we got to back to Haast there was this hillock and even though there weren’t loads of clouds around one especially big one had sat itself on top of said hillock which now looked like it was sporting a new hairdo. Precious! By that time sunset was in full swing and even though I was quite fond of this view Ellen pointed out „Maike, why aren’t we at the BEACH for sunset?“ Yes, why exactly I don’t know… Ellen, I guess we have to repeat that road trip to the West Coast! 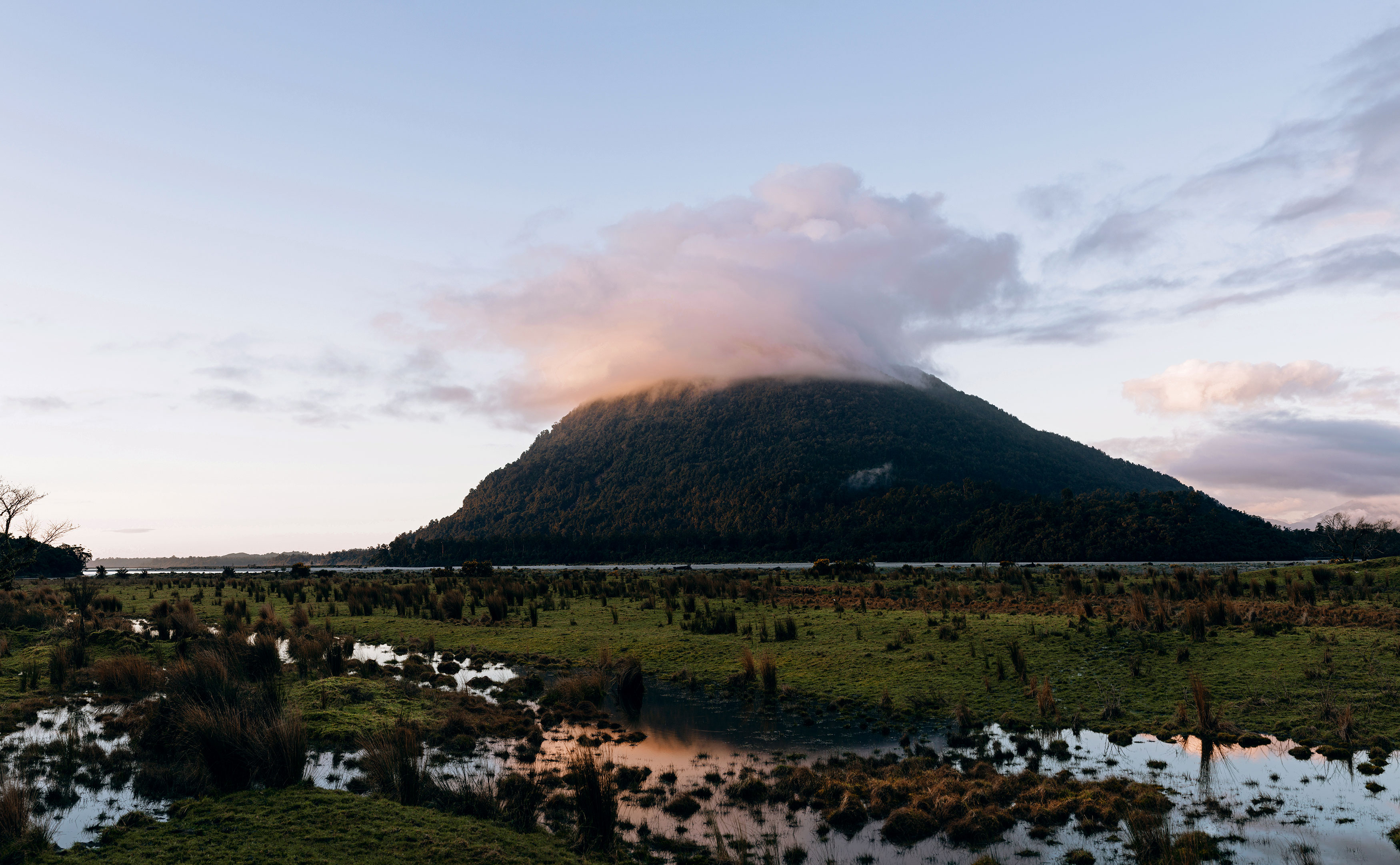 When driving along the Haast River, mountains looking down upon us we had to pull over another time. The light really meant well that day. The sky had turned dusky but the sun still illuminated the snow on the mountains and the clouds floating over the riverbed, tinging everything in soft hues of purple, pink and blue. 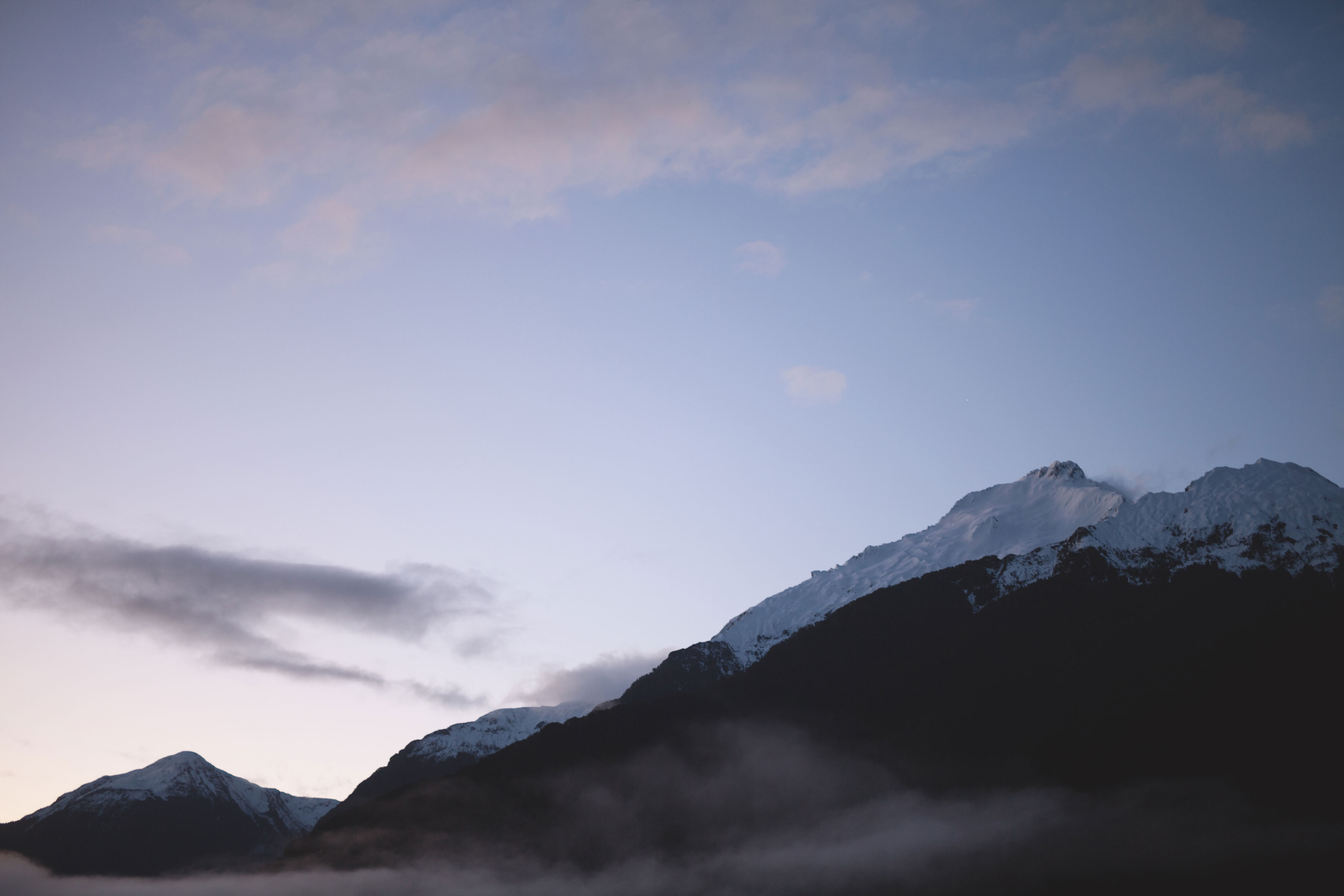 All the way back Ellen kept on checking her phone for Auroras. The kp index wasn’t the highest but the sky was clear and there was no moon so the conditions were alright.

We stopped one last time at the Neck, screwed our cameras to our tripods and let the lenses have a look at the night sky. With our bare eyes we weren’t able to make out much but we thought we’d give it a try anyway. When inspecting my photos I could have sworn there was a sliver of colour – though I have a hunch that it was only the city lights of Wanaka. It was a beautiful night sky all the same, Aurora or not. 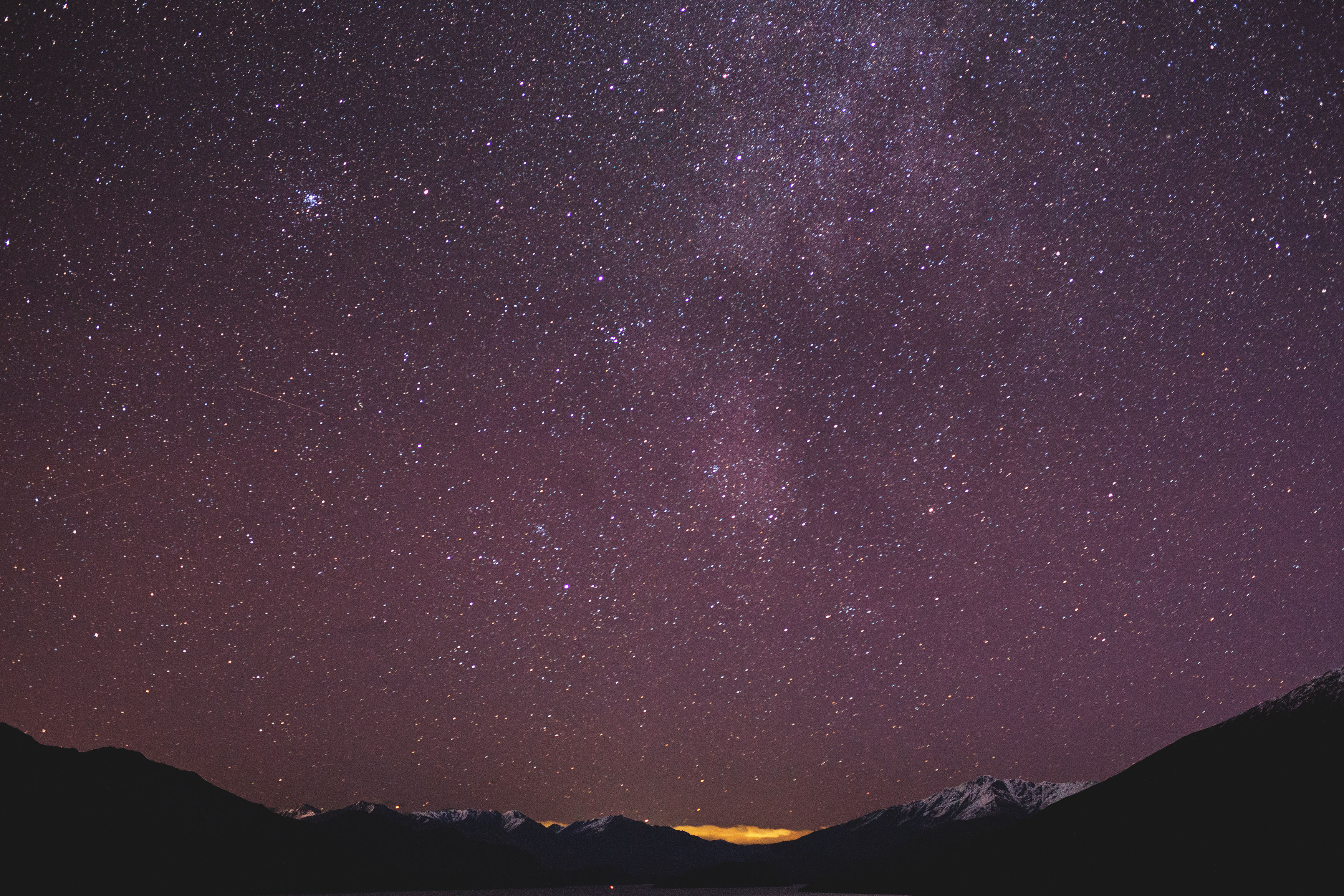 I dropped Ellen back off in Albert Town later that evening, both happy that we had been so spontaneous, both in love with the West Coast, and both very tired as we had tried to see as much as possible.

Go have a look at Ellen’s website and her Instagram account. Her photos are great, her attitude towards life even more so and I’m forever grateful that I know her!

As always, here are some more impression: 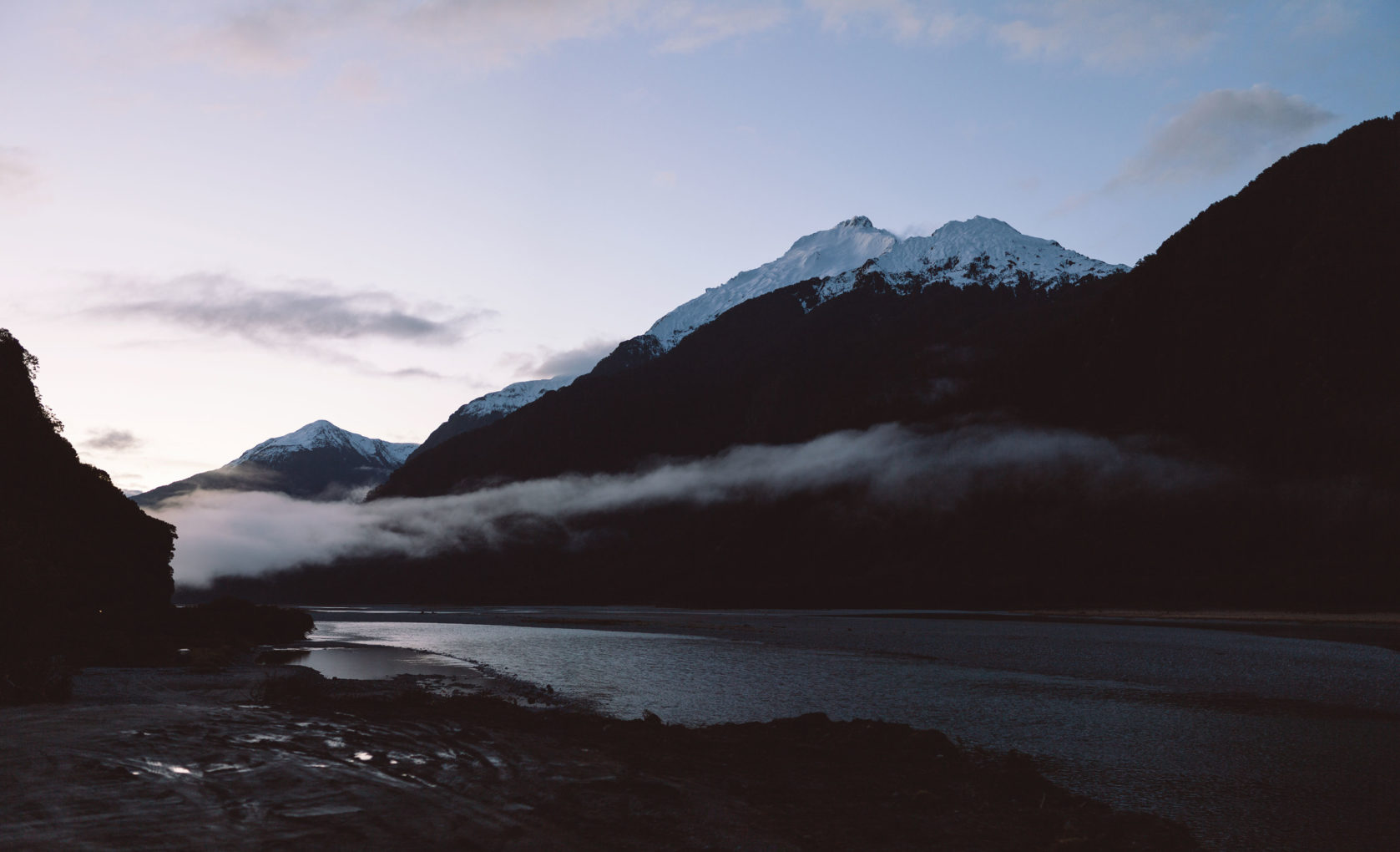 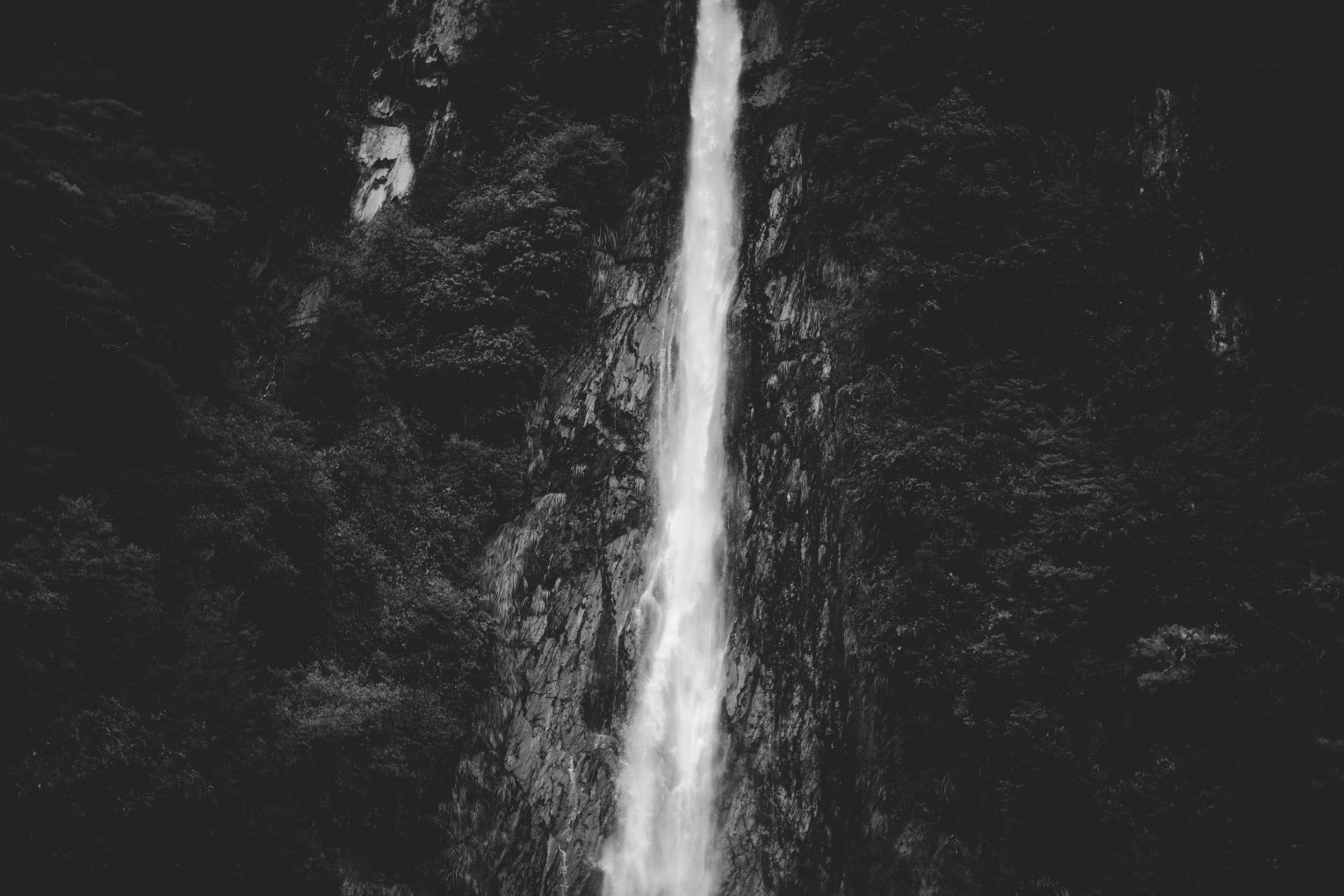 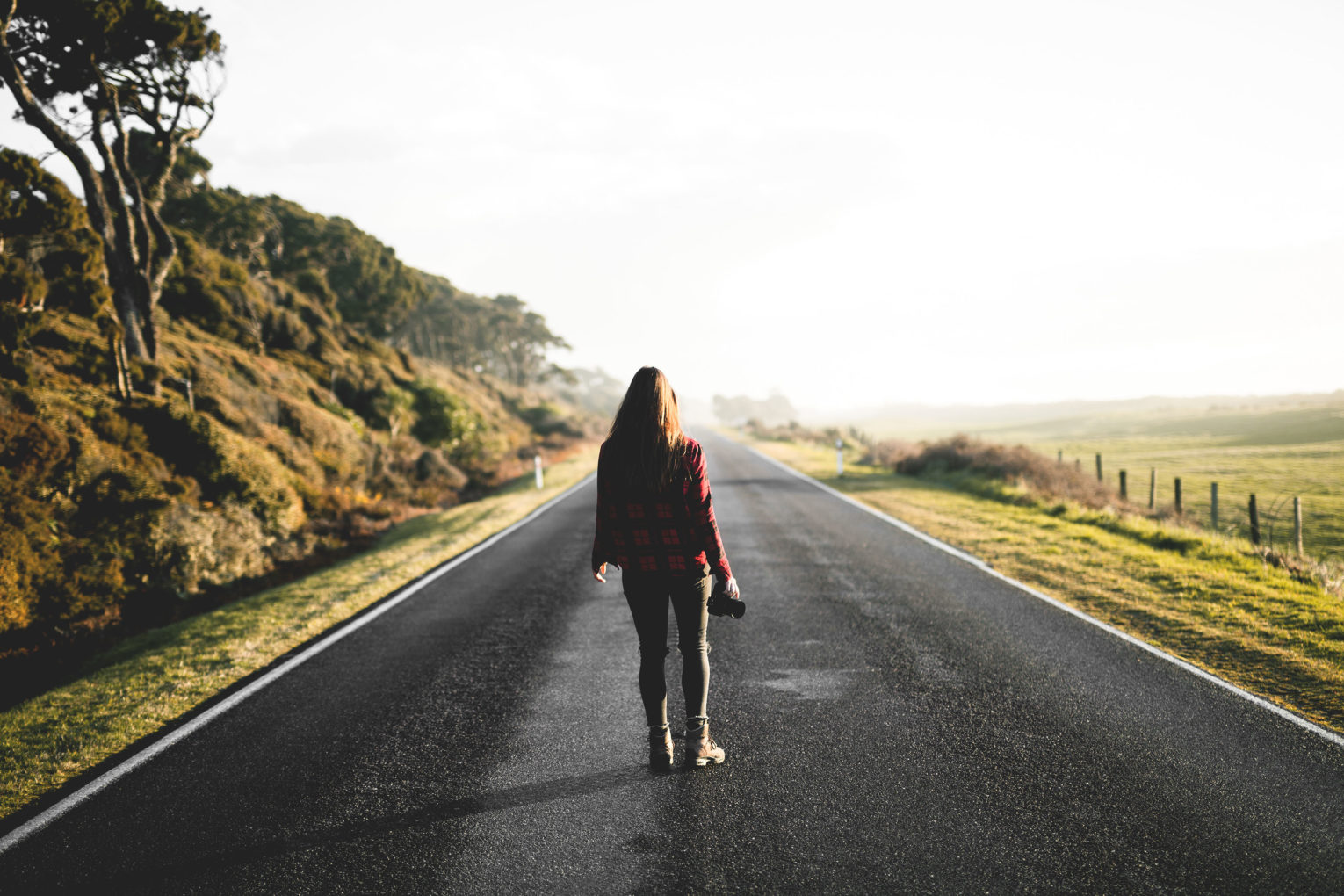 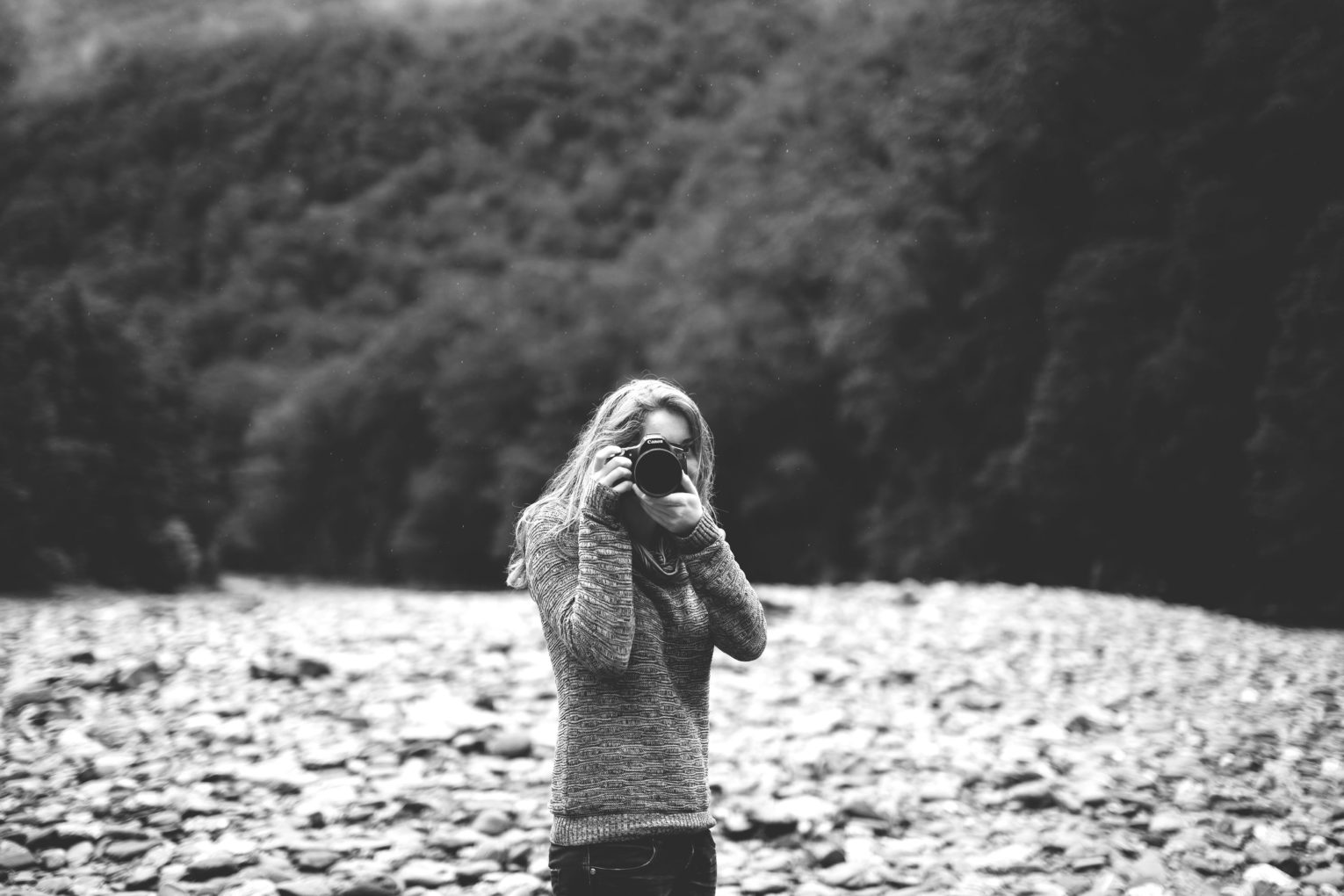 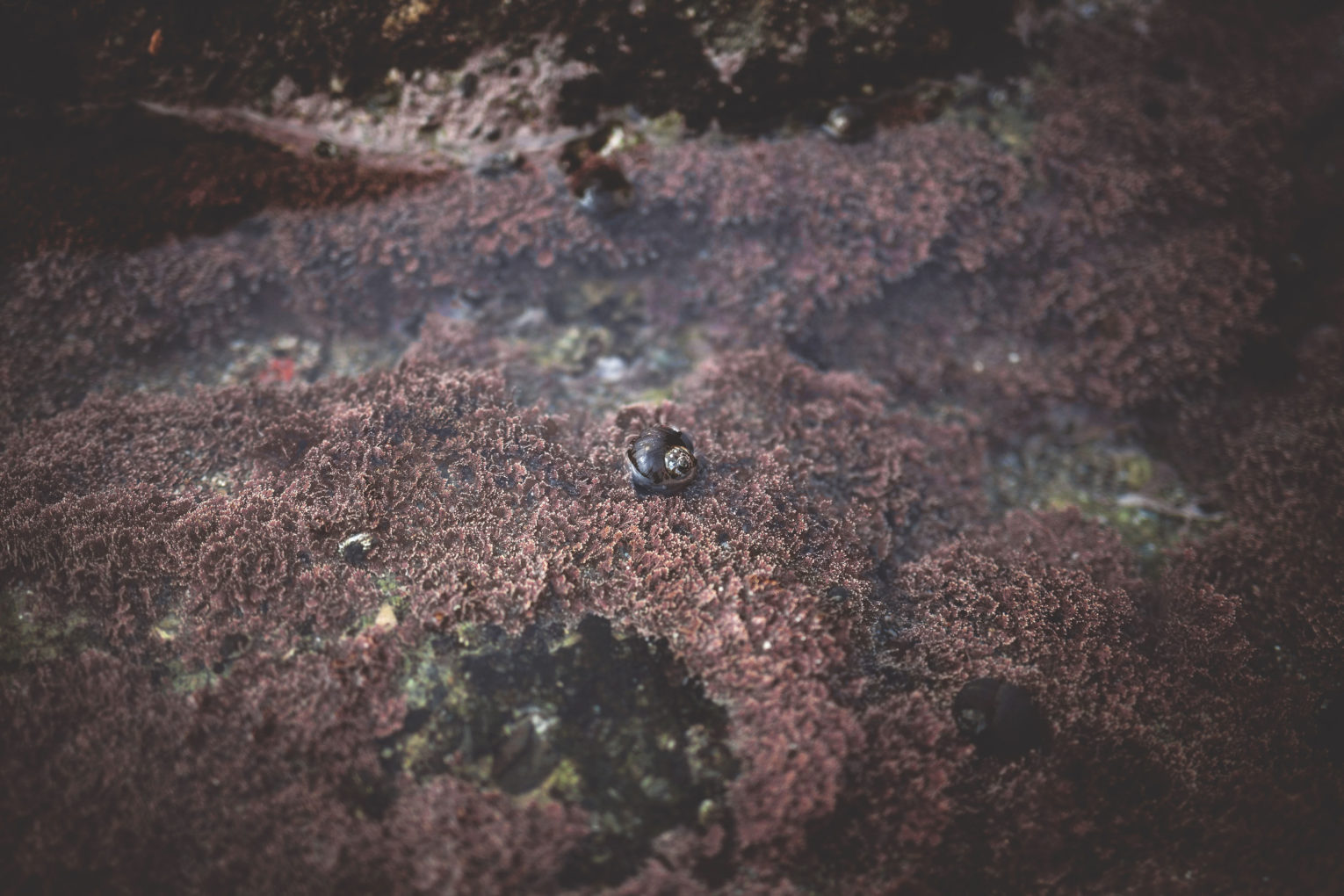 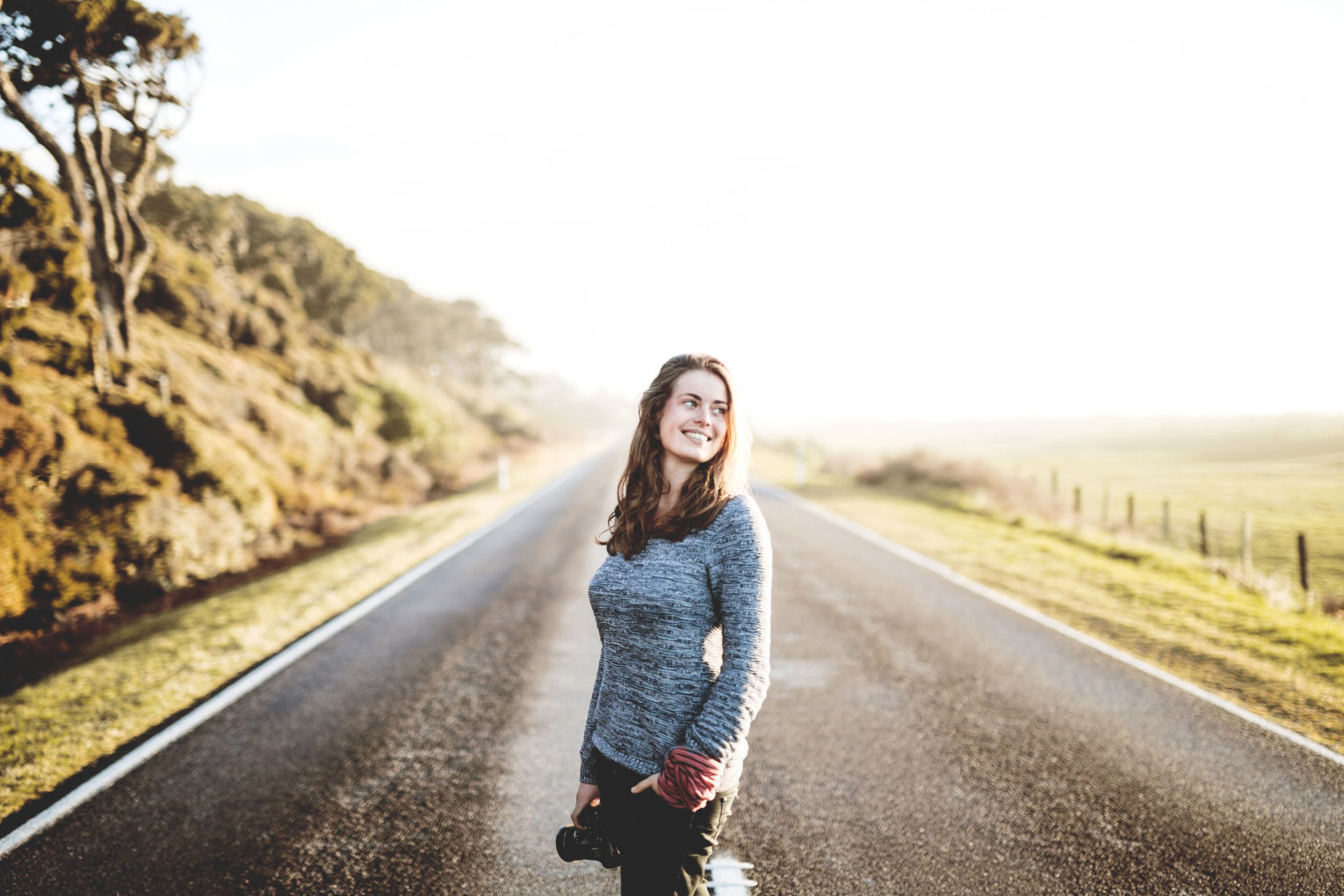 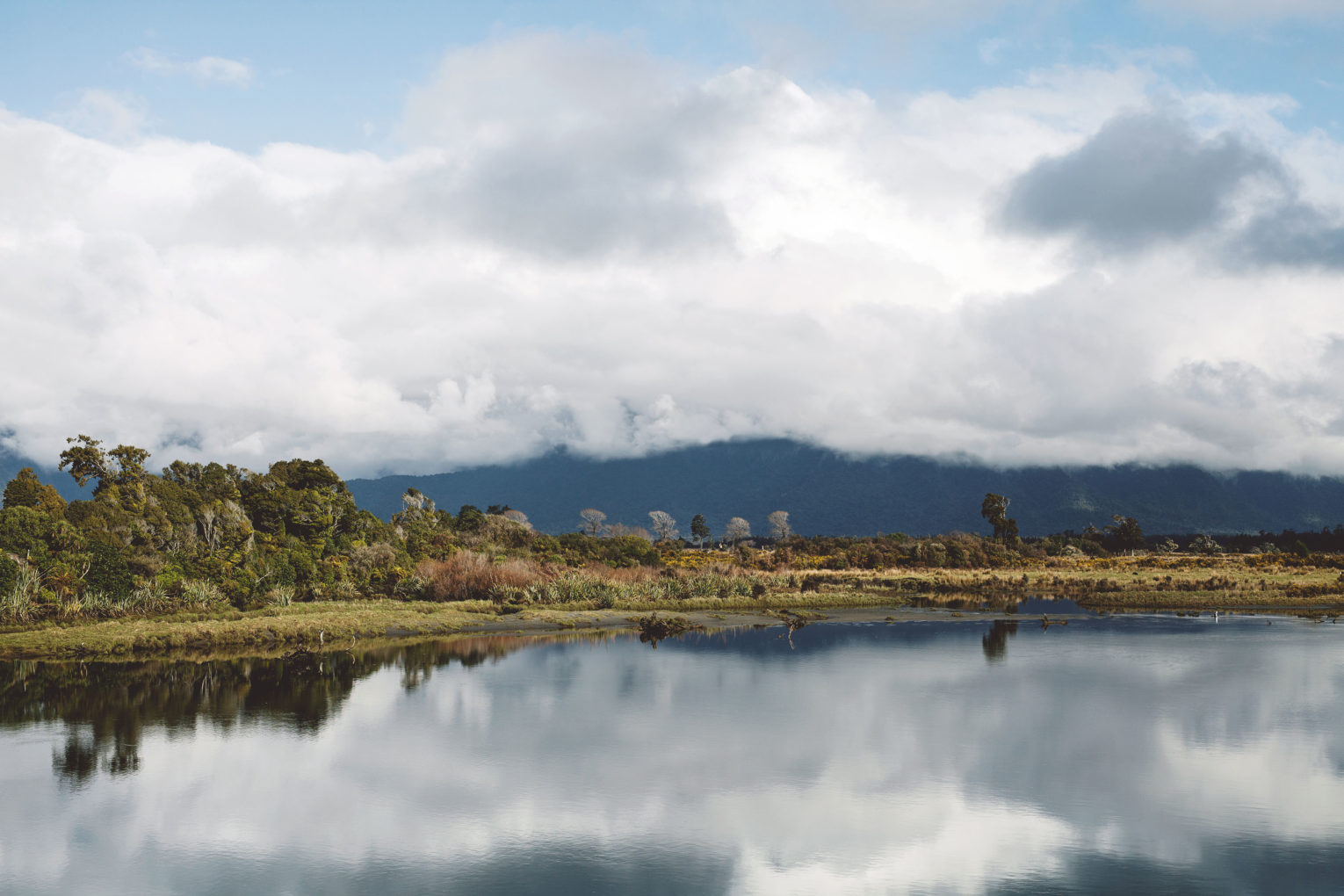 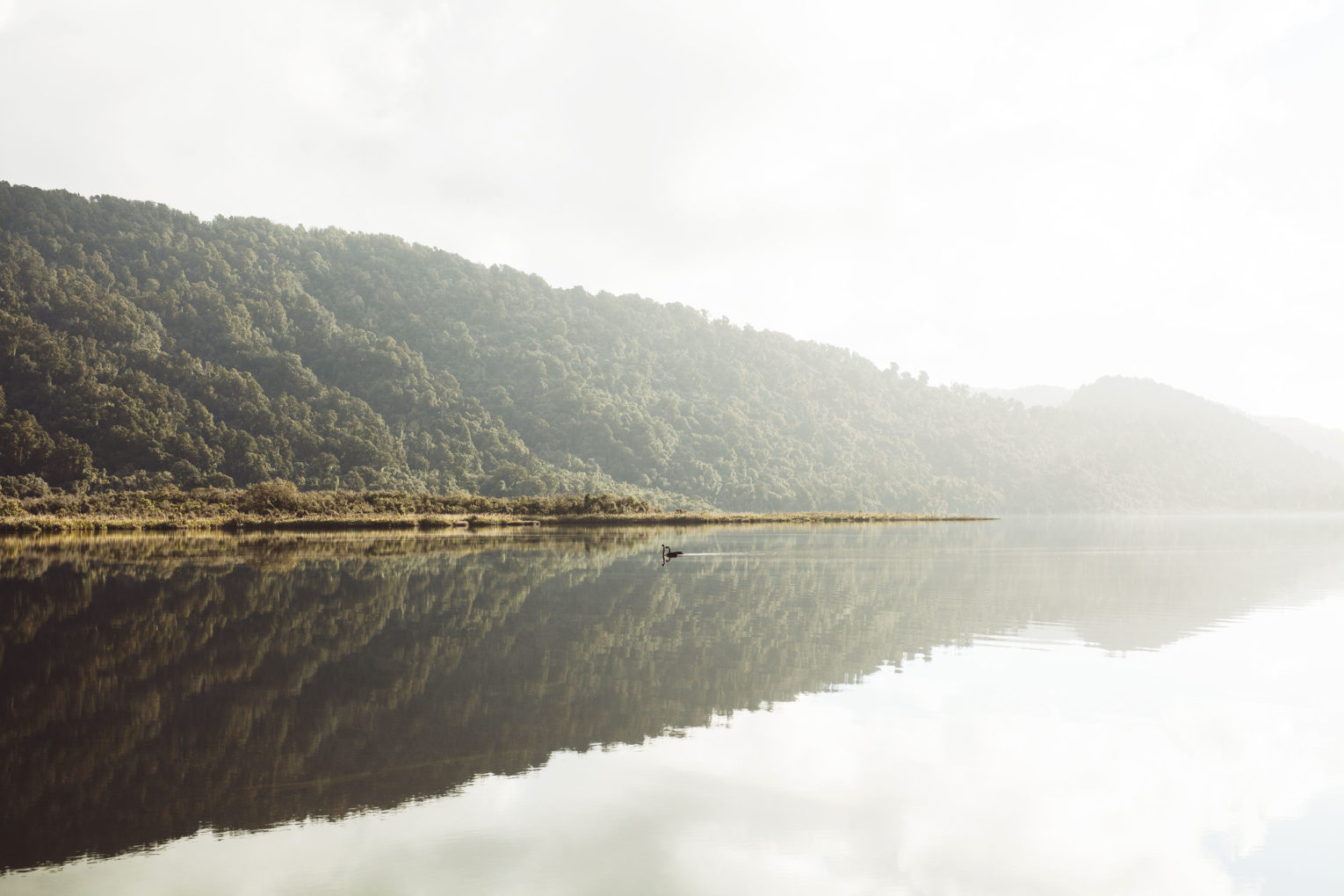 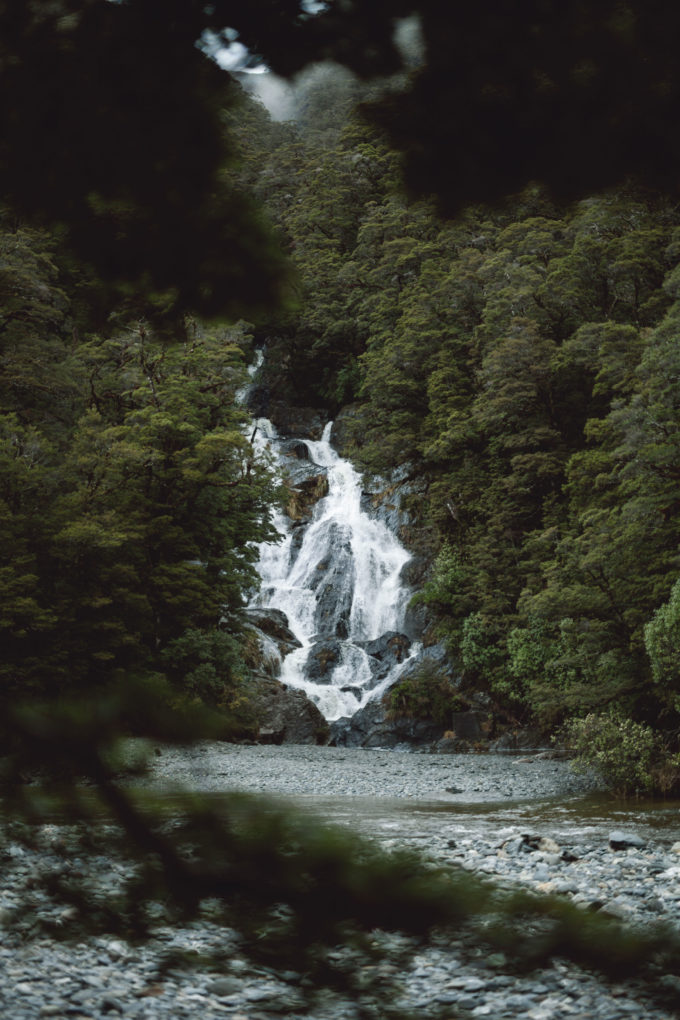 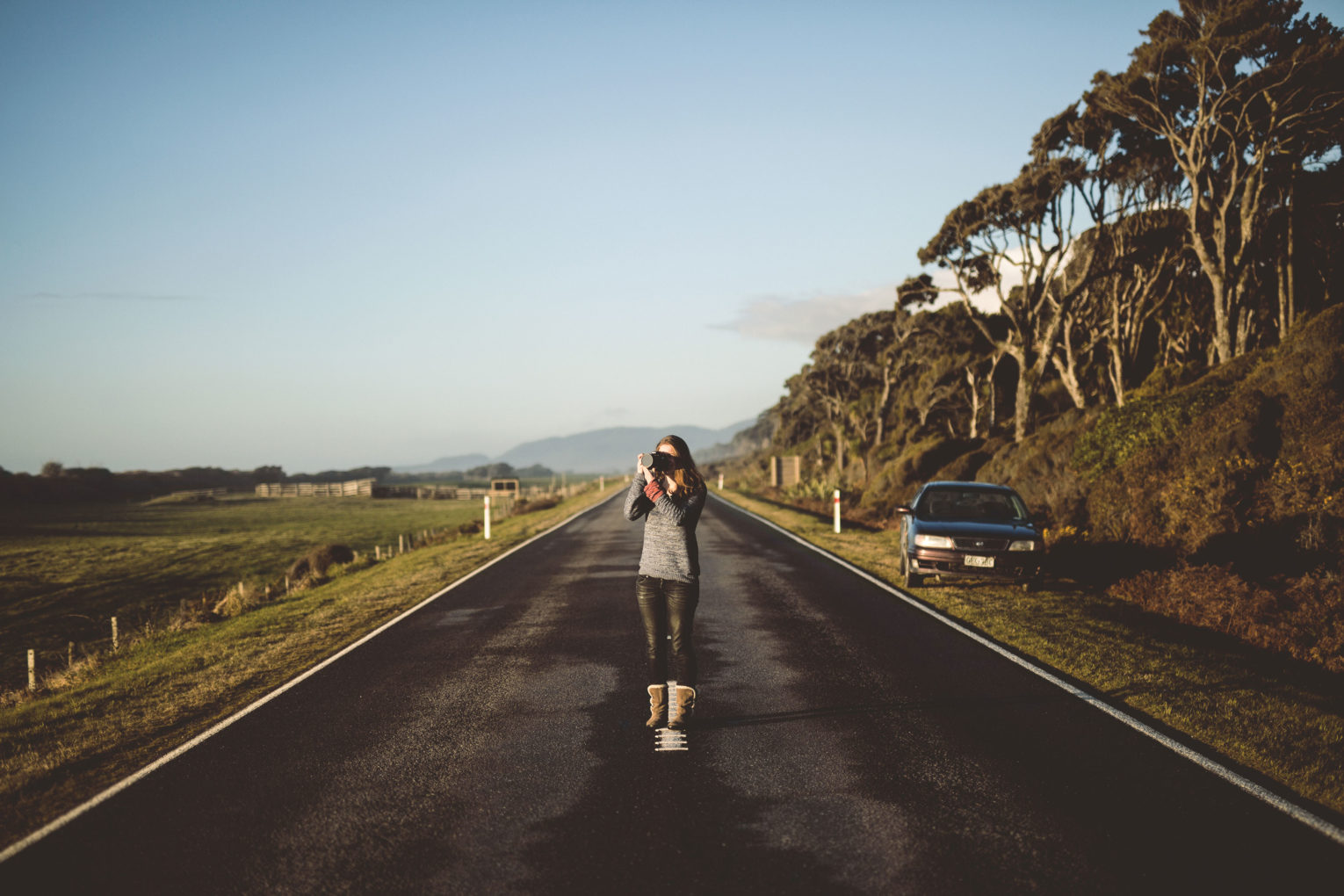 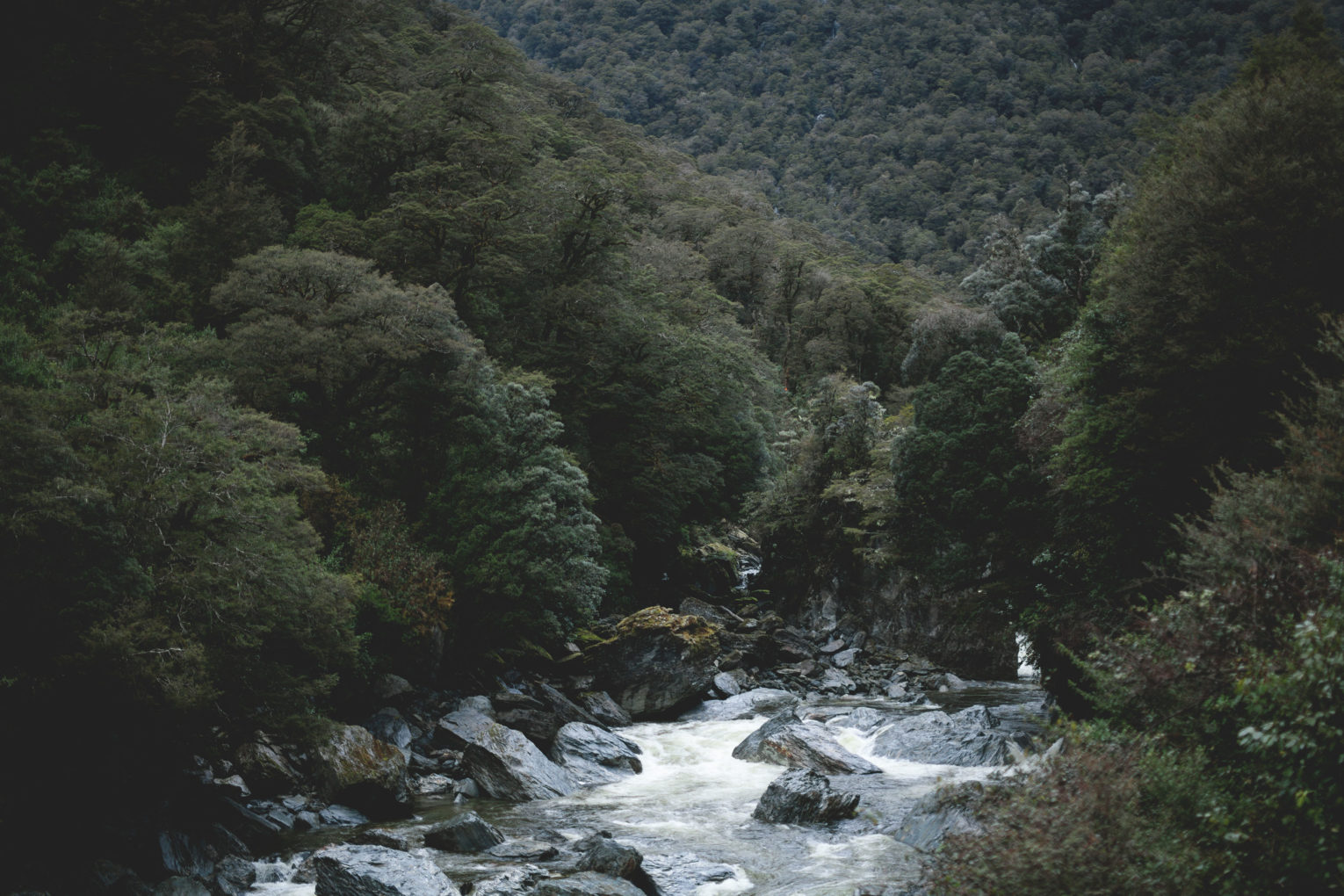 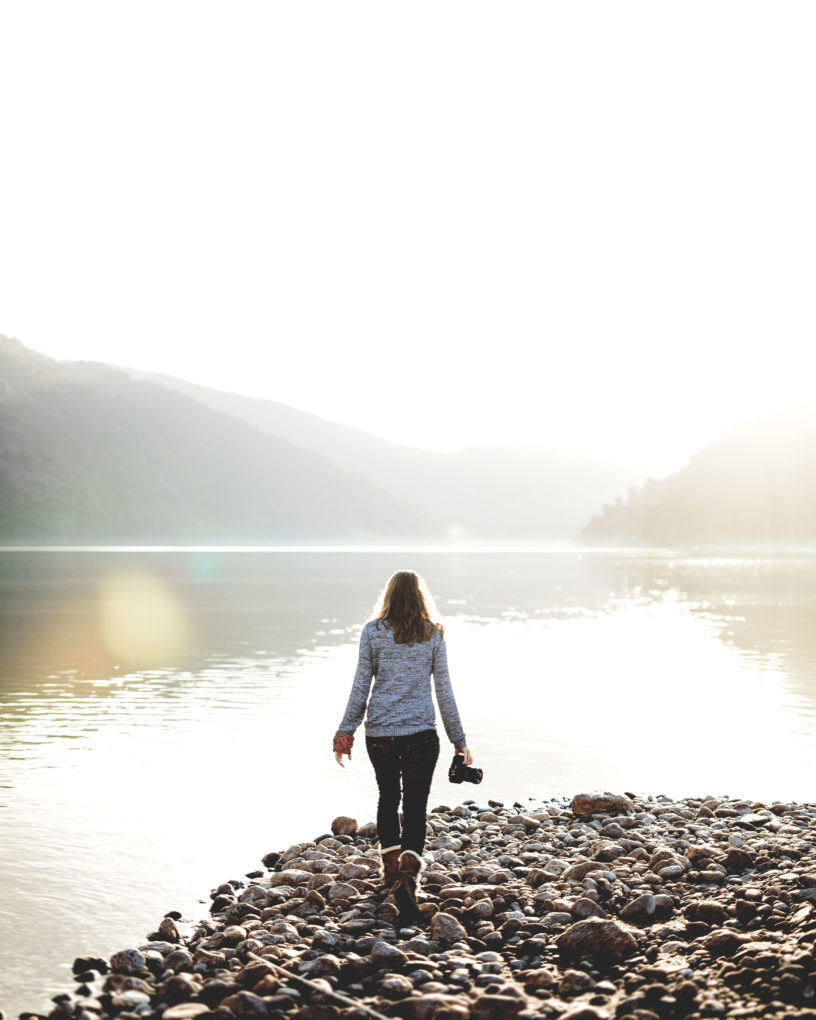 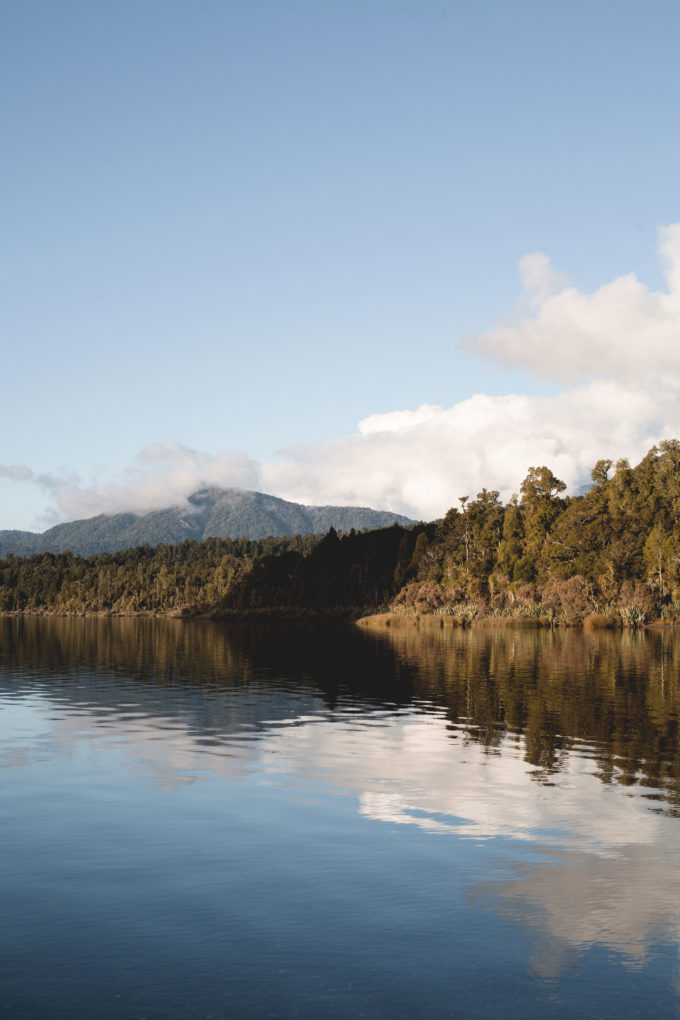 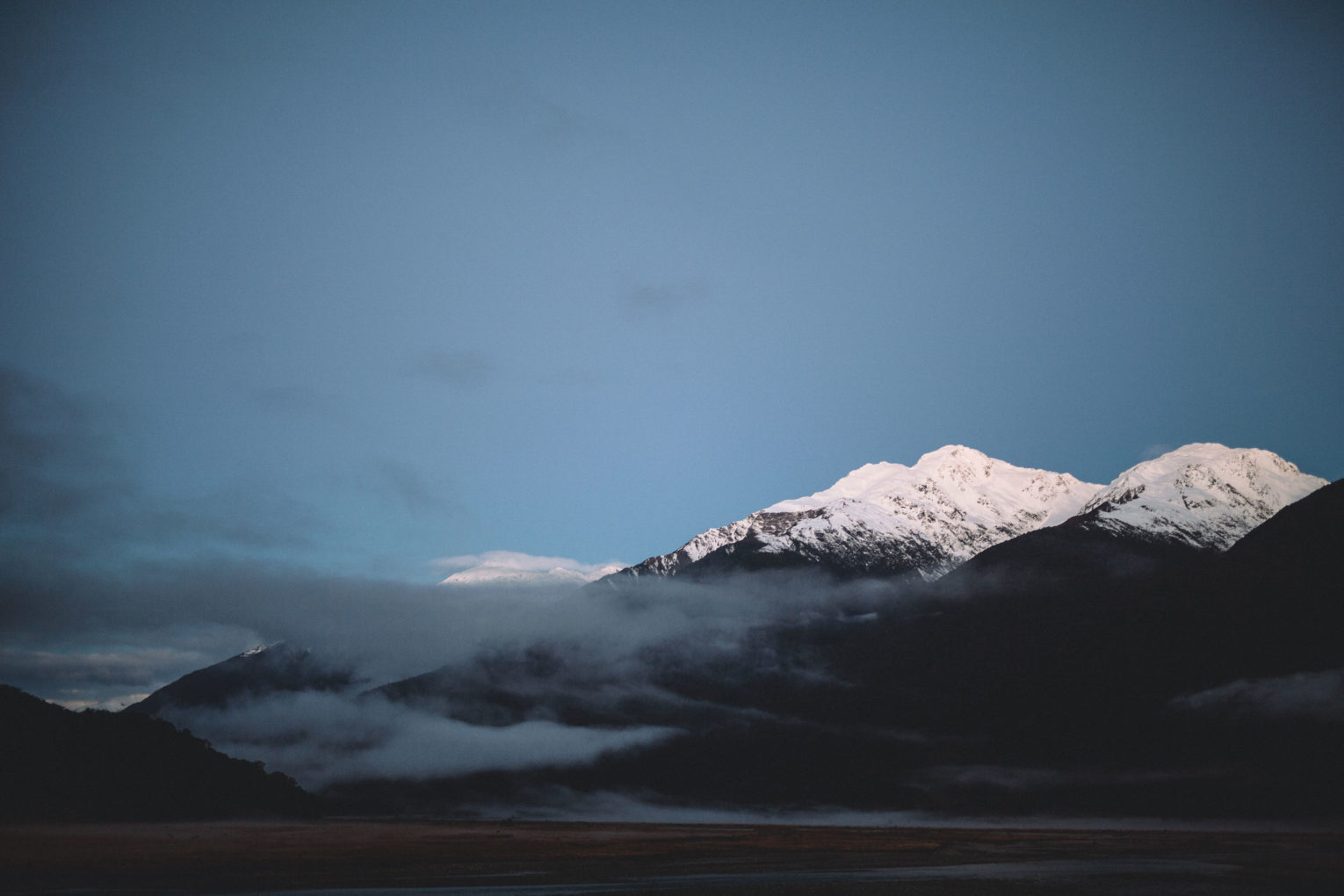 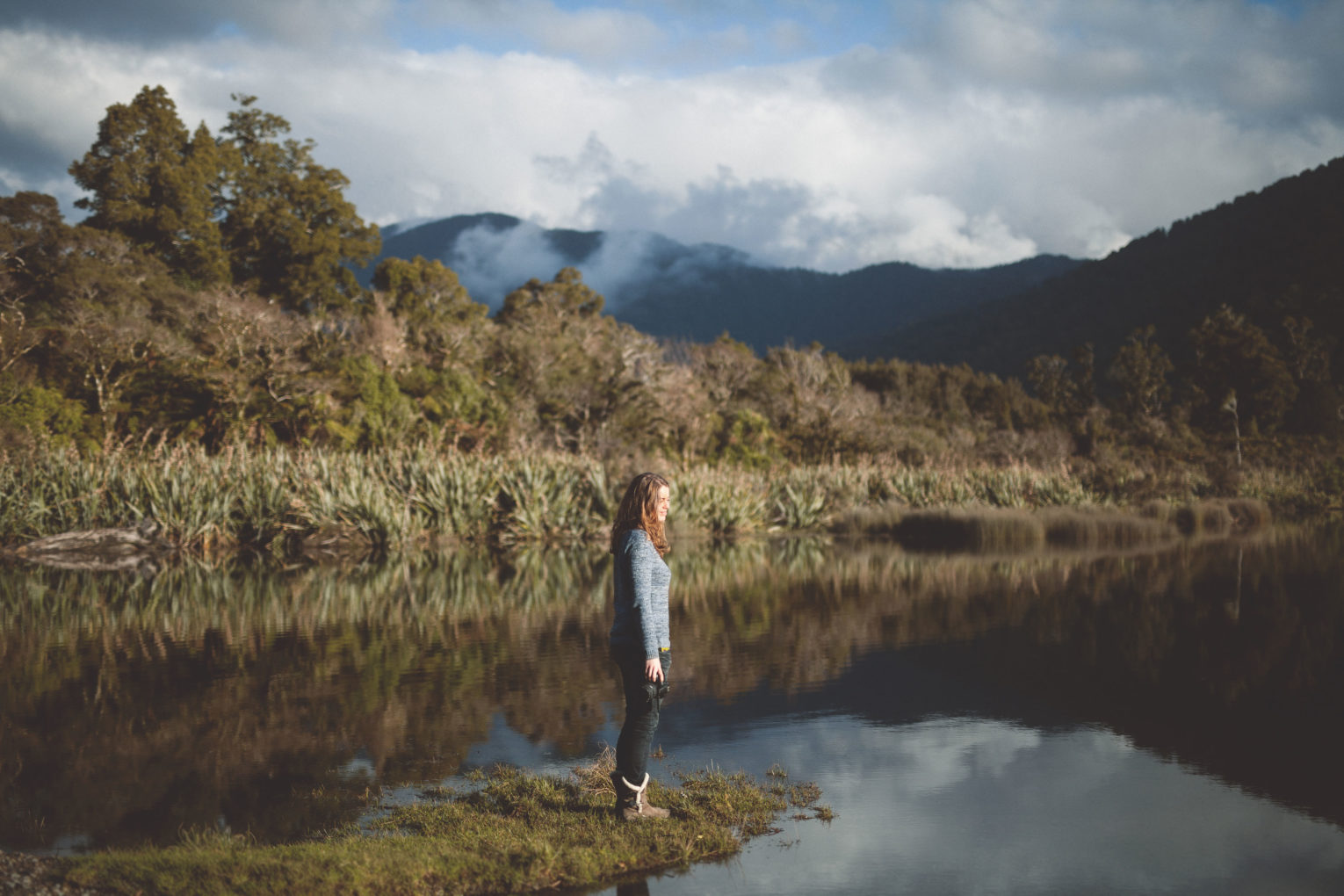