10 Places Scotland Didn’t Conceal From Us

10 Places Scotland Didn't Conceal From Us

‘Rain, rain go away. Come again another day’ that’s what I felt like singing many a time during our Scotland travels. But the rain didn’t feel like leaving at all, and it sure came back another day. Almost every day. Moody weather usually doesn’t get me down and I do like dramatic clouds, cold winds and the smell of rain is quite invigorating, too. But rain that is pouring down for 72 hours straight and clouds that are hanging so low the landscape in front of you is swallowed whole? That would leave anyone moping about. 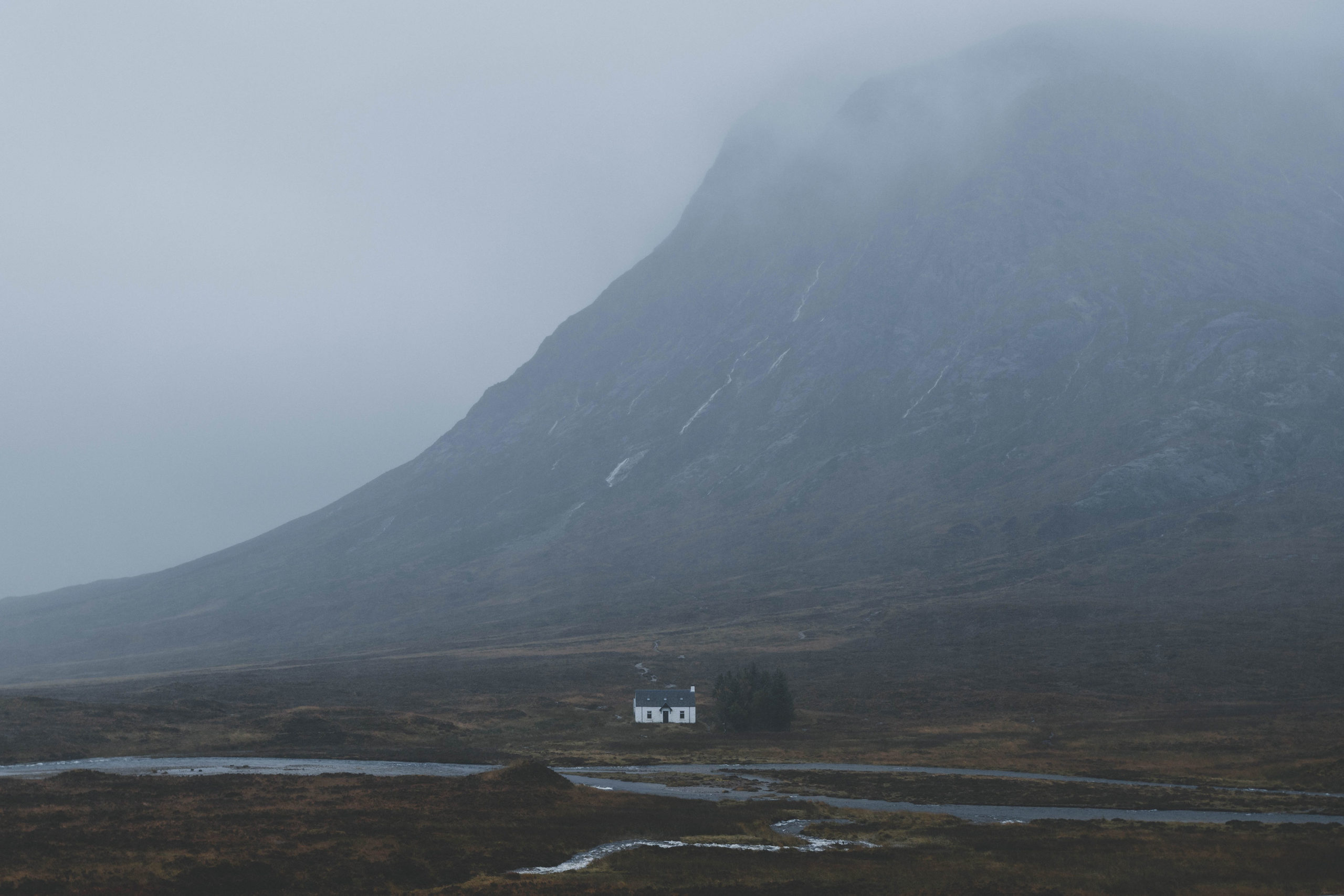 When Philipp and me decided that October should be the time we travelled to Scotland, I knew that it wouldn’t be all sunny and warm. It’s Autumn after all. But the Scotland we got to know didn’t hesitate to show us what it is like to be forever exposed to the Atlantic Ocean.

The good thing is that you start to appreciate the sunny and dry moments a lot more than you usually would have done. Of course I remember the hours we drove through pelting rain, the days we just stayed inside, cuddled up in bed because going outside would have meant getting drenched to the bone, and when I close my eyes and think of Scotland I can still see the movement of our windscreen wipers. 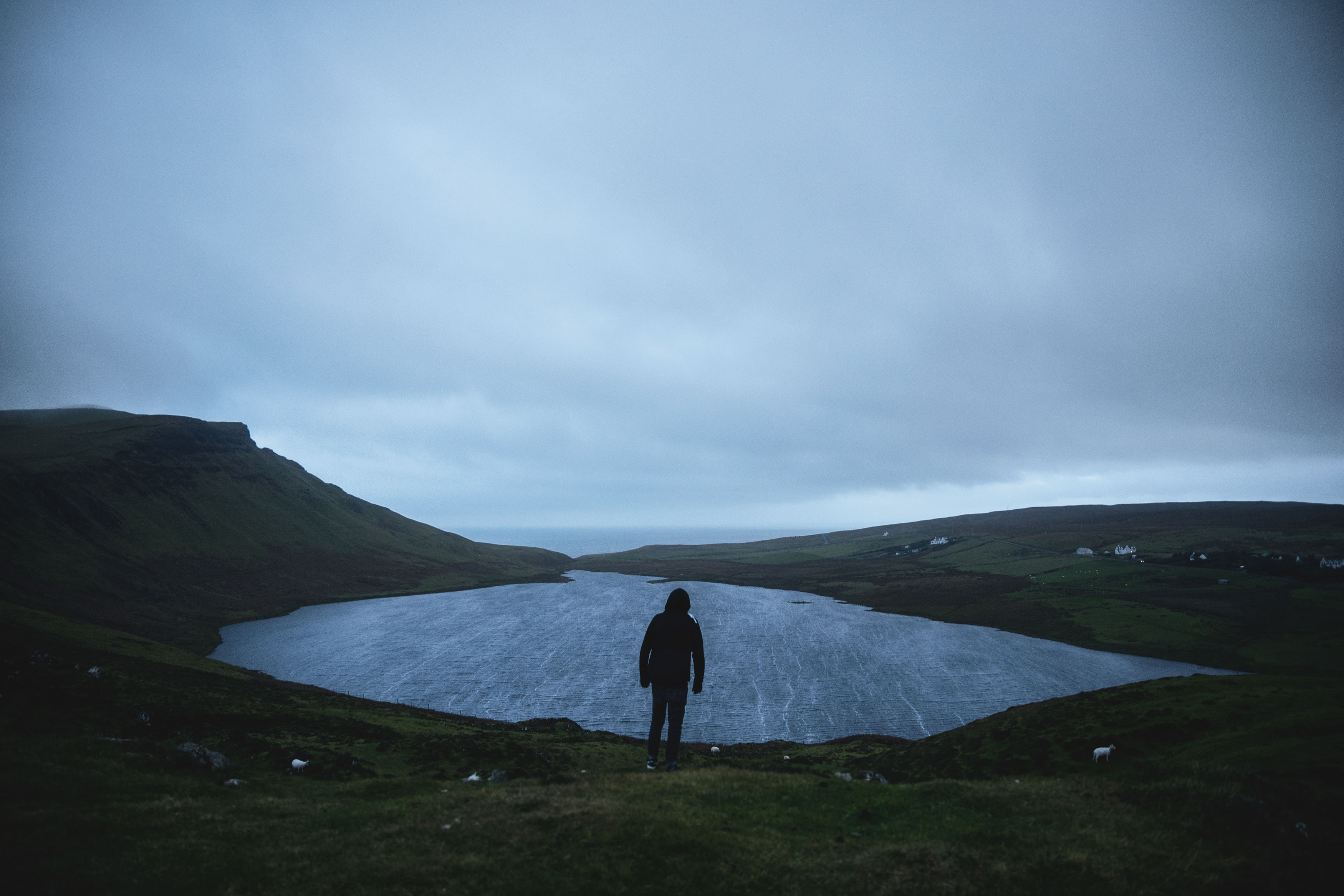 What still stands out most though, are the sun-kissed, rainless moments when we could fully enjoy Scotland’s mountains and lochs without clouds obscuring everything from view. Those moments weren’t abundant but when they occurred they left us happier and even more grateful.

That’s why I turned this into a ’10 Places Scotland Didn’t Conceal From Us’ blog entry – to remember the happy, mostly clear and dry days. So let’s get on with it, shall we!

Some of you might know that I have a thing for lighthouses so naturally Neist Point was top of our Scotland bucket list. I had seen a fair few photos of the lighthouse, situated in the very far West of the Isle of Skye but I didn’t know what else to expect. What awaited us when we got there one late afternoon blew us away! 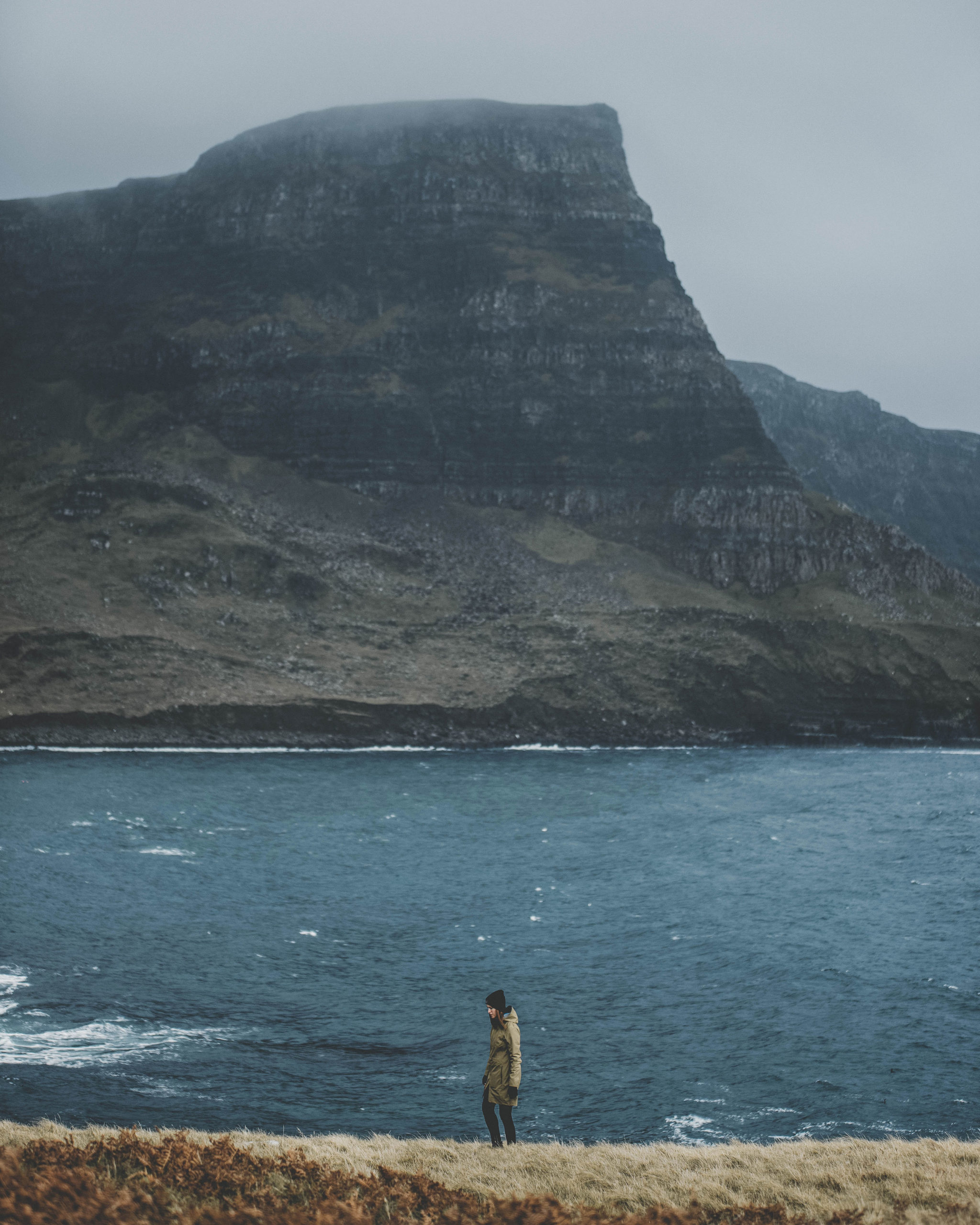 The lighthouse itself is a stunning sight, standing at the end of a vertical cliff but the surrounding coastal scenery is just as impressive with cliffs reaching immeasurable heights. Dotted here and there were tiny specks of white: sheep grazing in spots that would leave most two-legs in a petrified state. Seagulls and gannets were gliding on the rough see breeze, looking out for a snack below the oceans surface. A more perfect seascape is hard to find, especially when the sun is poking her head out as well. The sunset we experienced here will be forever imprinted in my memory and makes up for all the sunsets Scotland kept from us. 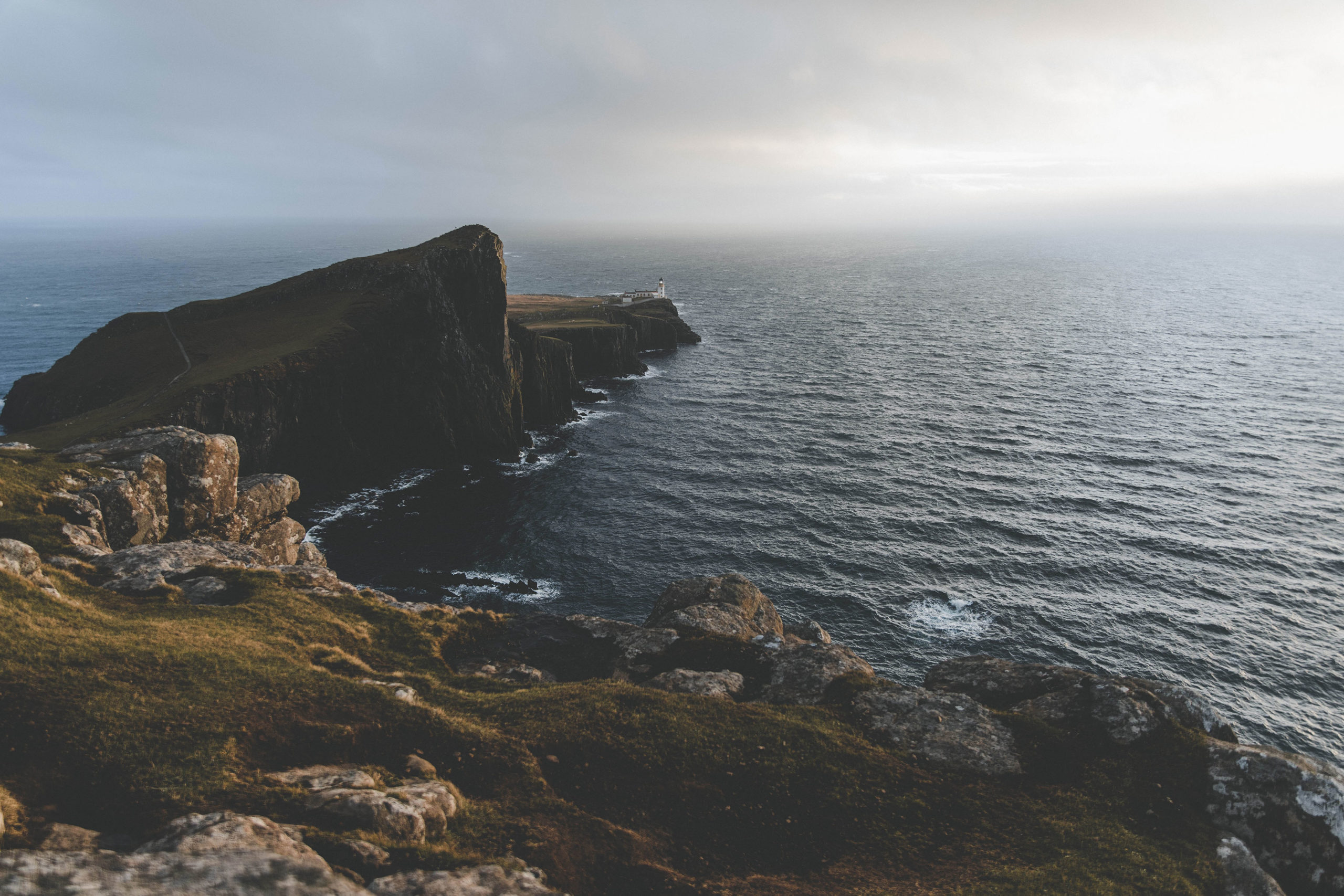 A visit to the Isle of Skye wouldn’t be complete without gazing upon the Old Man Of Storr. Philipp and me approached the Trotternish Ridge, atop which the Old Man is situated, from the South. We had arrived in Portree early and as the clouds weren’t threatening to send rain our way we decided to drive the short distance to the Storr. Even from afar we could spot the entity of pinnacles that make up the Storr, the Old Man standing tallest among them at a height of about 50 meters. There’s a carpark right next to the main road and that’s also where the track up to the curious rock formations starts. Although the track is fairly easy you have to be careful when the ground is wet and muddy – it can be a slippery affair, especially when you are already a little bit clumsy on your feet. 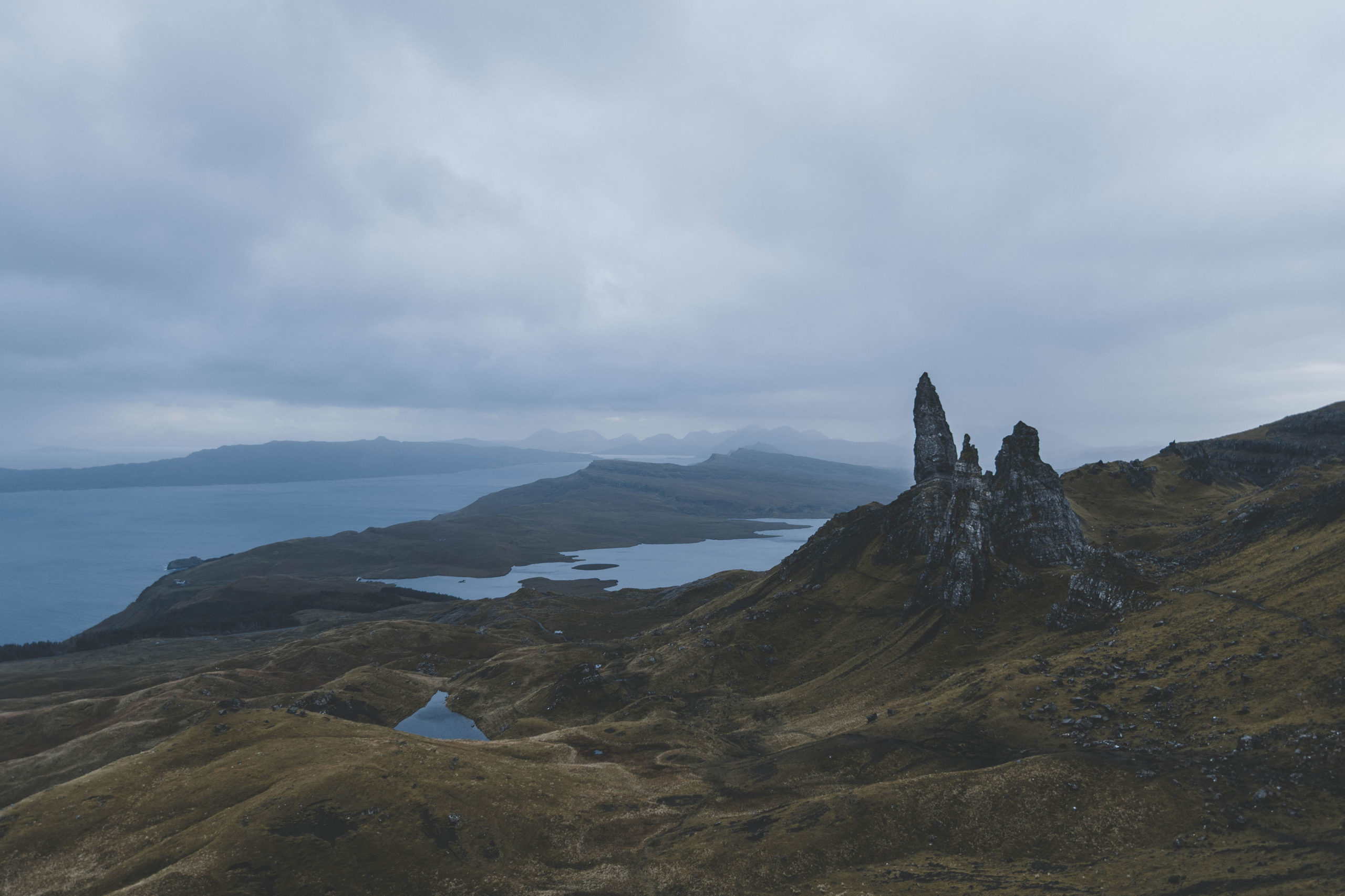 They might not look that huge from down below but the closer you get to the Old Man and its adjoining brothers and sisters, the more intimidating they appear. To get a really good look of the surrounds keep on hiking for a wee while longer to a little plateau opposite the pinnacle rocks. From up there you’ll have magnificent views over the Sound of Rasaay and the mainland.

Unfortunately most of our hiking plans were thwarted by bad weather so when the forecast did look fine we just grabbed a map, had a look at what’s close by and decided on a track. That’s how one night Philipp and me settled on Stac Pollaidh (or Stac Polly) to be our next days adventure. 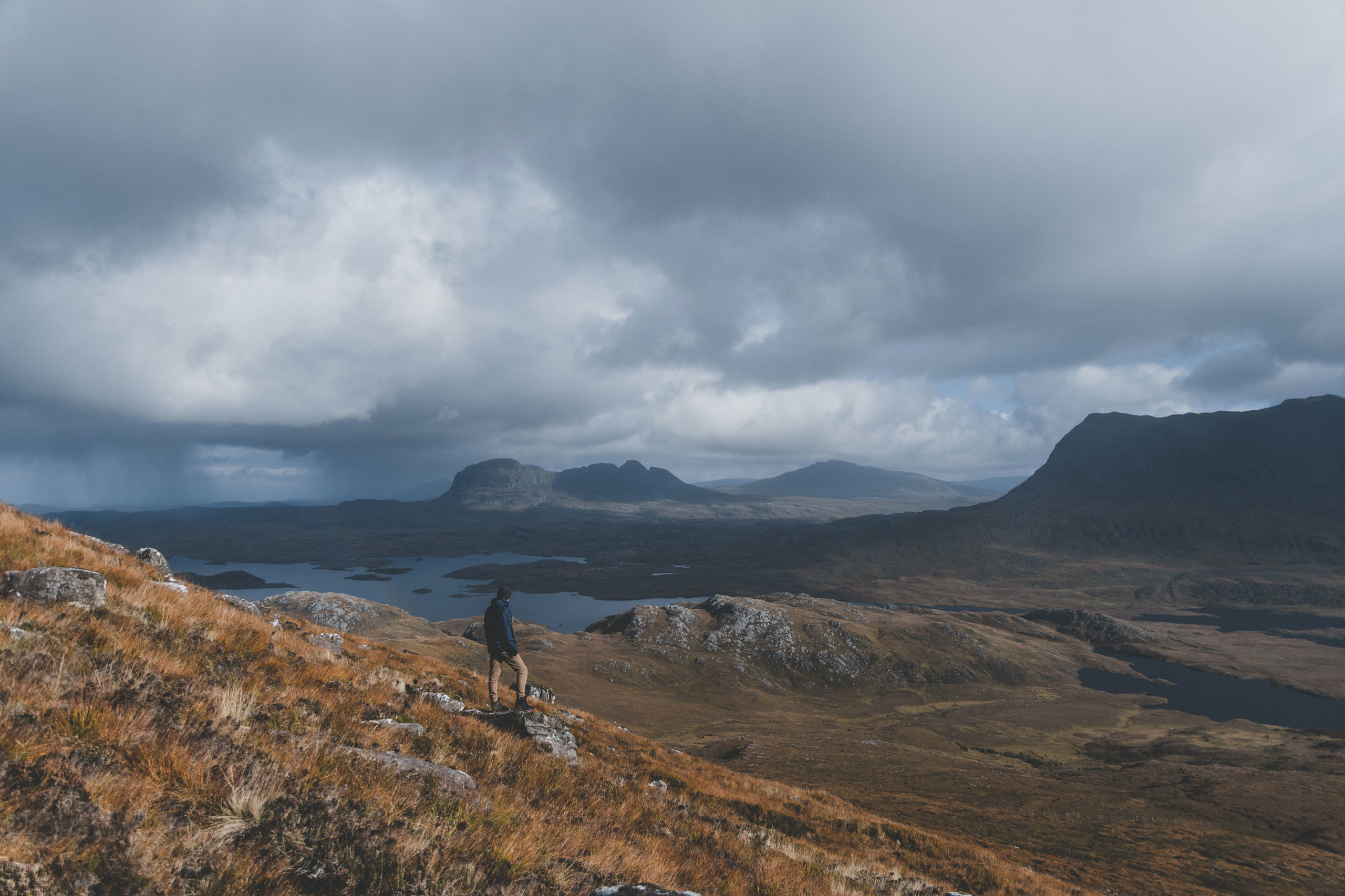 The mountain lies in the region of Wester Ross (I just wanted to point that out) and the track we did doesn’t require any hiking expertise to be tackled – though I heard that the side track to the western summit is a bit sketchy. The circuit however is easy enough and doesn’t take too long to finish unless you stop a lot to marvel at the surrounding area like we did: the Highlands stretched out in front of us, here and there lochs twinkled in the sunshine, and to the far West we could glimpse the ocean. Even a short hail storm that surprised us on the eastern summit of Stac Pollaidh didn’t dampen our spirits.

Drumbeg is a village you wouldn’t necessarily come across when visiting Scotland. Remote and secluded it lies further North and if we hadn’t fled the heavy rain on the Isle of Skye we never would have discovered it. With a population of only 60 people it is as quaint and quiet as one would expect. In fact, it is so rural that during breakfast we observed a good-looking deer trying to impress the girls that were grazing in our Airbnbs backyard. There’s a little view point in the village center as well, providing amazing seaward views and if you wanted to buy some locally handcrafted things, Drumbeg Stores would be your first pick. 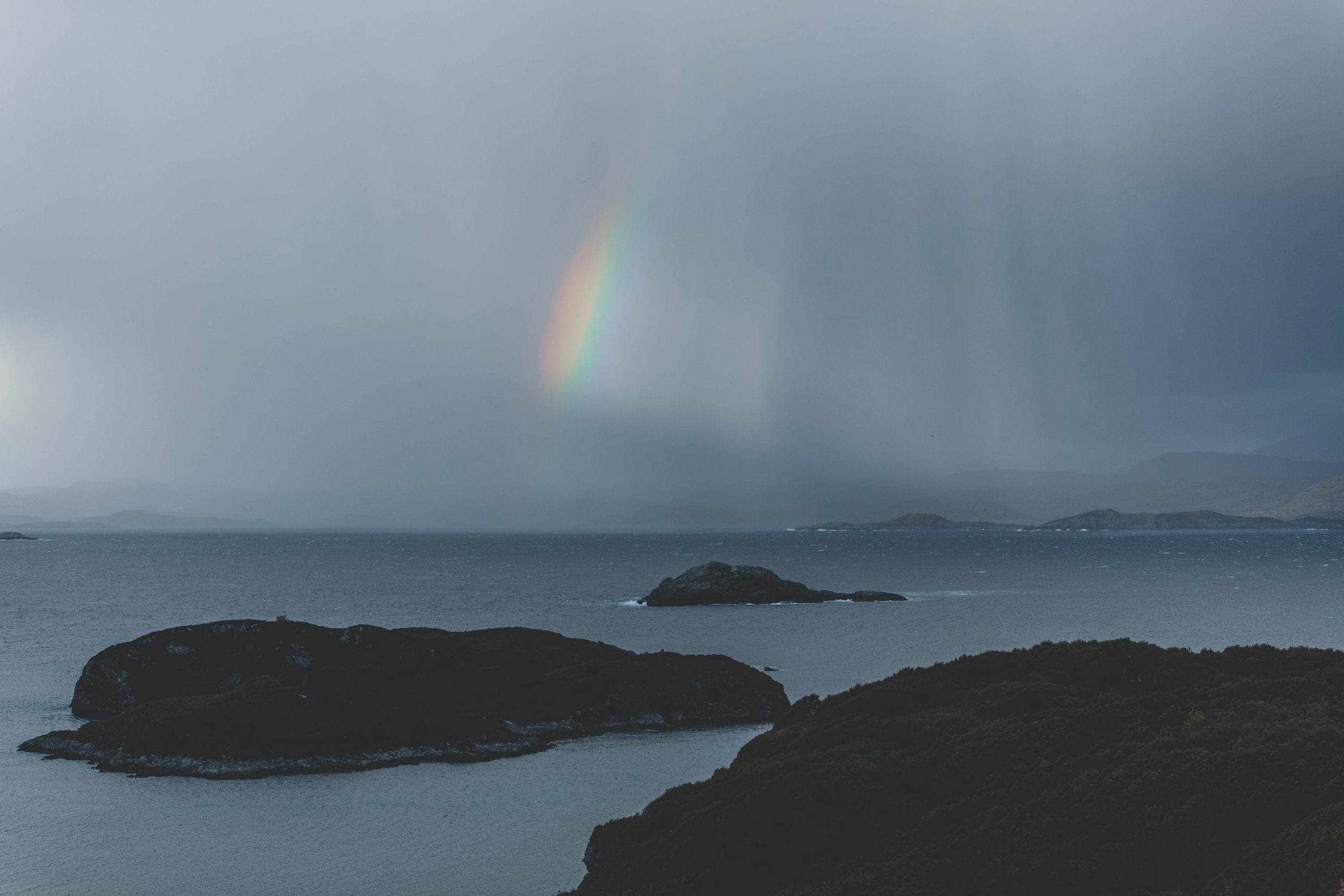 On our northbound escape to Drumbeg we stopped at Achmelvich Bay to relish the fresh sea air. The clouds above us had given way to blue skies, the tussock grass was lazily dancing in a light breeze, and the waves were gently kissing the shores. It was a truly peaceful moment to take in and if we hadn’t already booked our accommodation in Drumbeg we might even have stayed at that little YHA right by the beach, only to sit in the sand and watch the sun sink into the ocean. 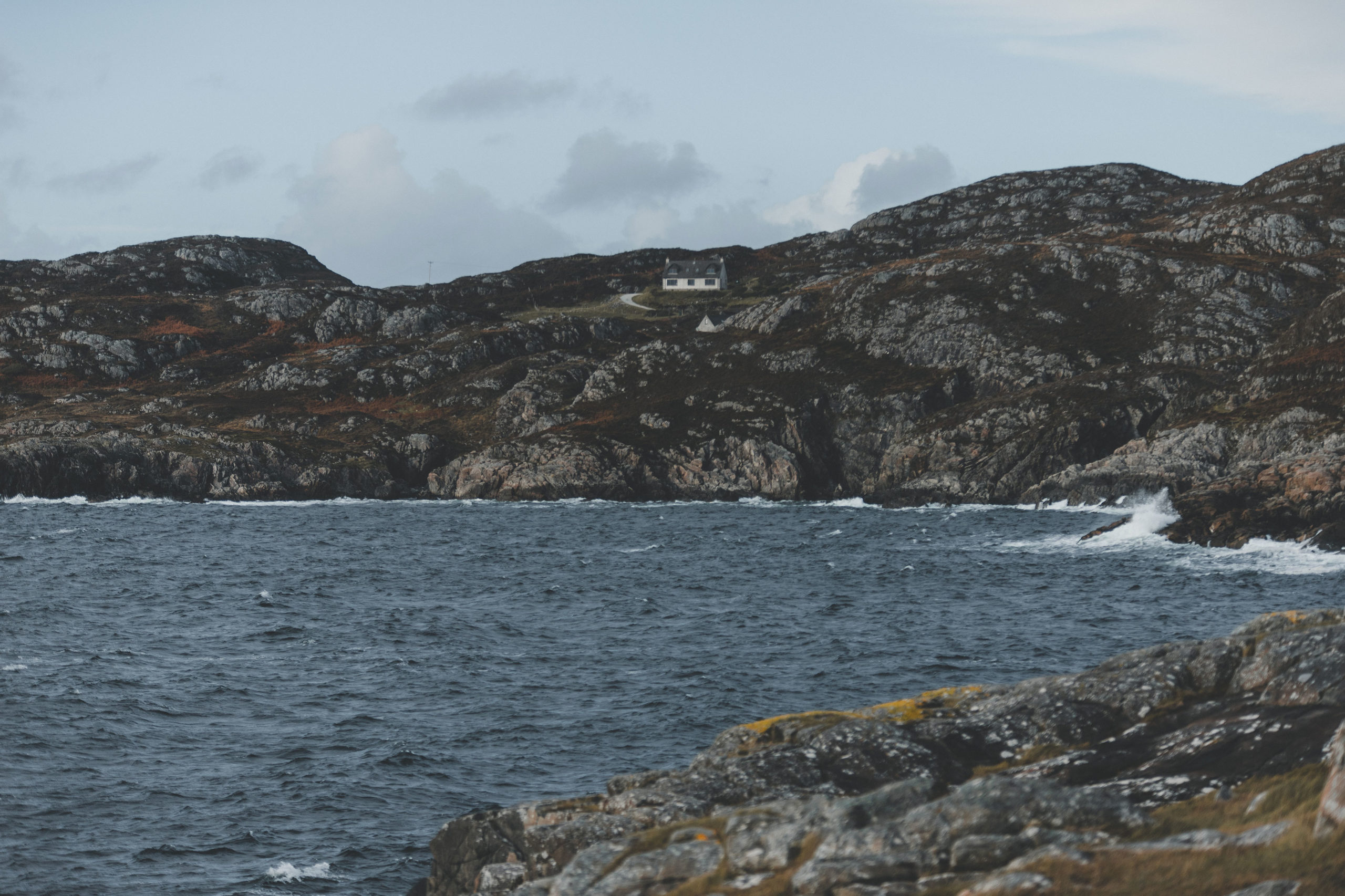 We came across Ardvreck Castle rather spontaneously while driving along the northern side of Loch Assynt. There’s not much left of what must have been a great stronghold once – one stroke of lightening was enough to turn the place into a piteous ruin. The history of Ardvreck Castle is a sad and tragic one: it is said that in the 15th century, the chief of the MacLeod family dealt with the devil, the promised price being one of MacLeods daughters. When she found out about her fathers cruel deal she desperately threw herself off the highest tower and died. Legend has it that she is still haunting the place, while others believe that the lake surrounding the promontory on which the ruin stands, took her mercifully and ever since she’s been living in its deep waters. 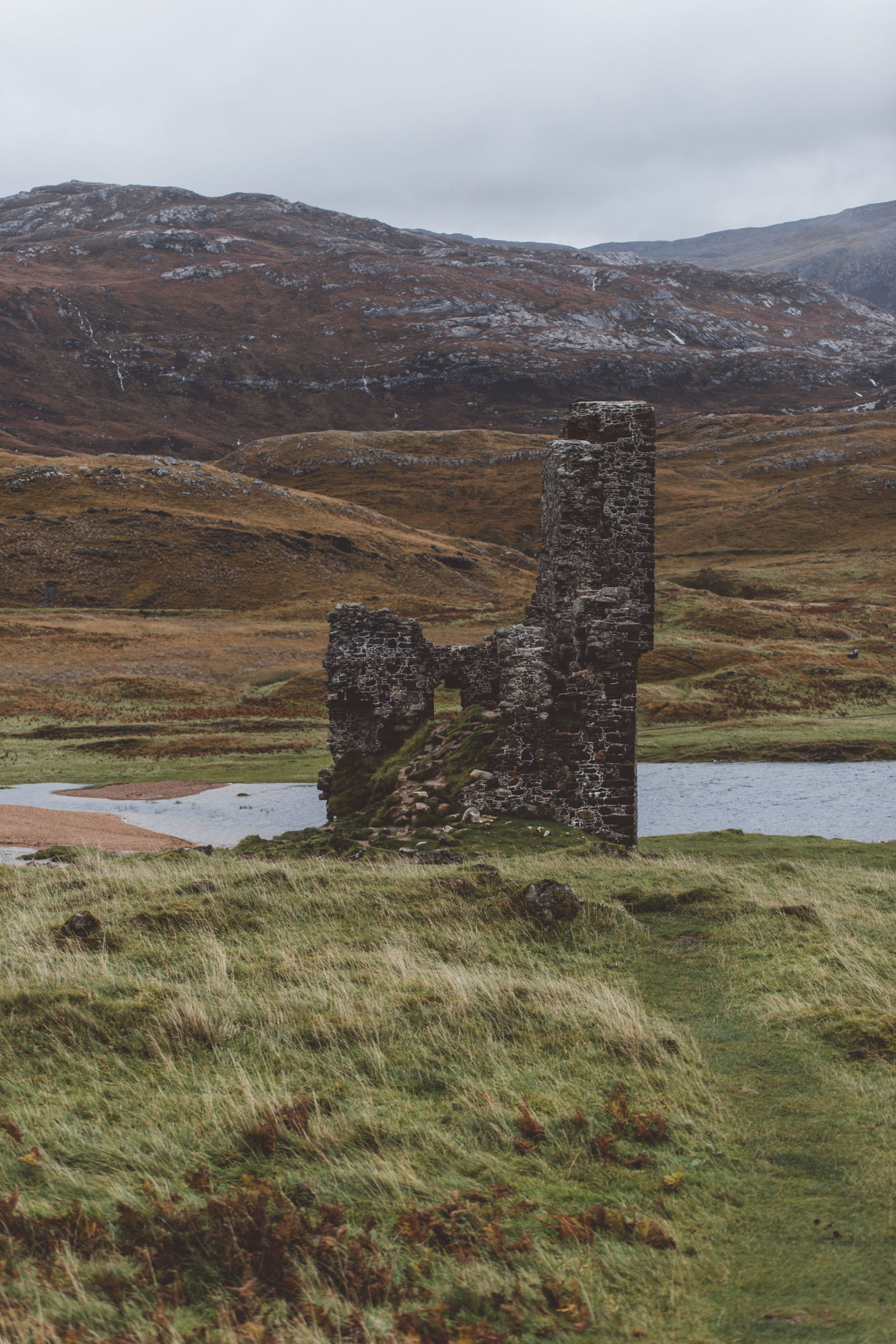 The Glenfinnan Viaduct at the head of Loch Eilt must be one of Scotlands most visited spots thanks to a certain young wizard who used to travel over that very bridge in the Hogwarts Express. Most of you will know it from the movie version of The Chamber of Secrets where Harry and Ron fly Mr Weasleys enchanted Ford Anglia over the train tracks. Being a pretty famous spot you can’t bet on having it all to yourself – there’s usually a flock of people waiting patiently for the red Jacobite steam train to arrive. 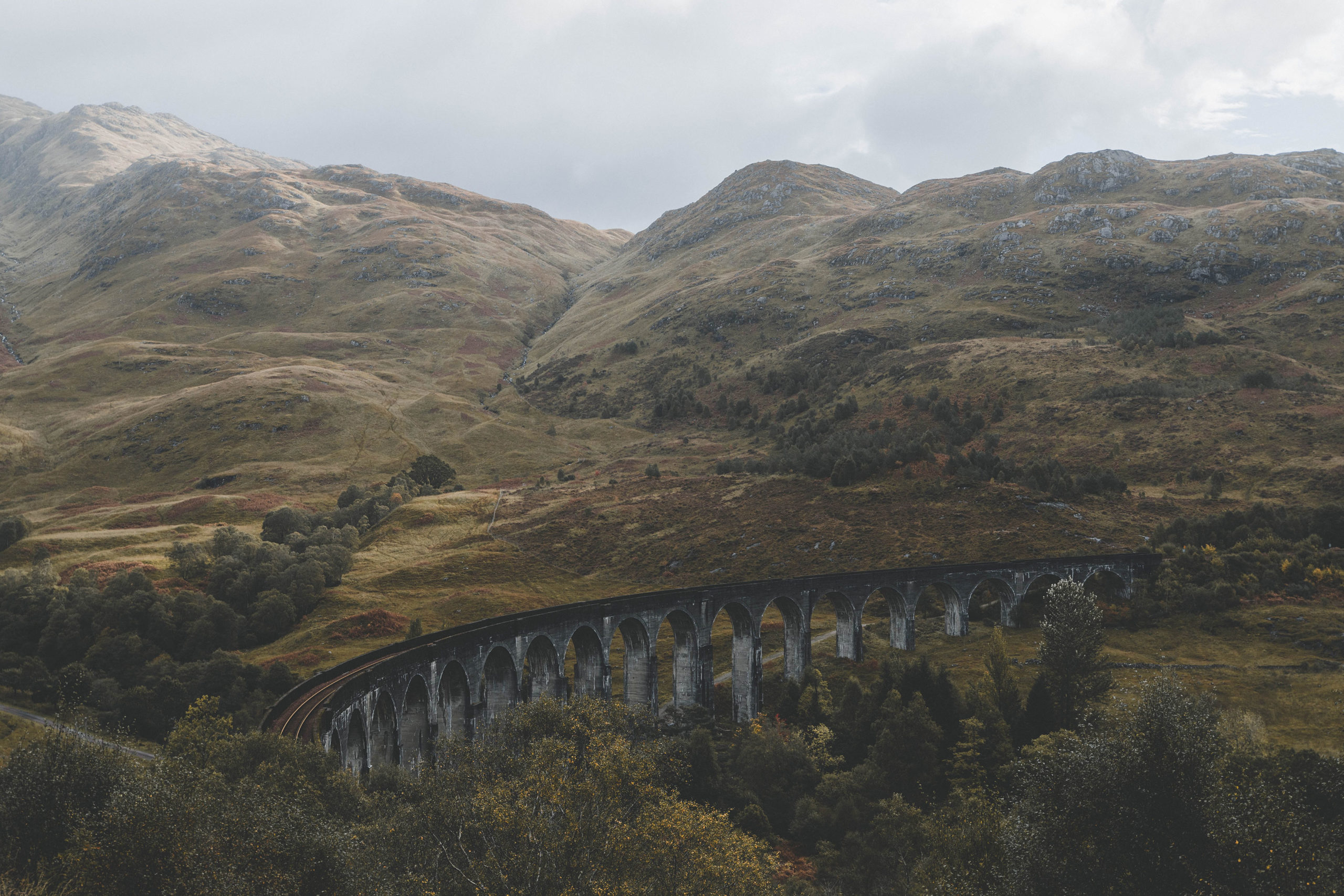 After an hour of waiting, neither train nor flying Ford Anglia made an appearance so we checked the Jacobite steam train website: apparently they had some technical issues and cancelled that afternoons train ride. As a great Harry Potter fan I was a wee bit disappointed but the sight of Loch Eilt from the viewpoint just above the carpark brought a smile back to my face. It was exactly how I had always imagined Scottish lochs and their surroundings to look like. 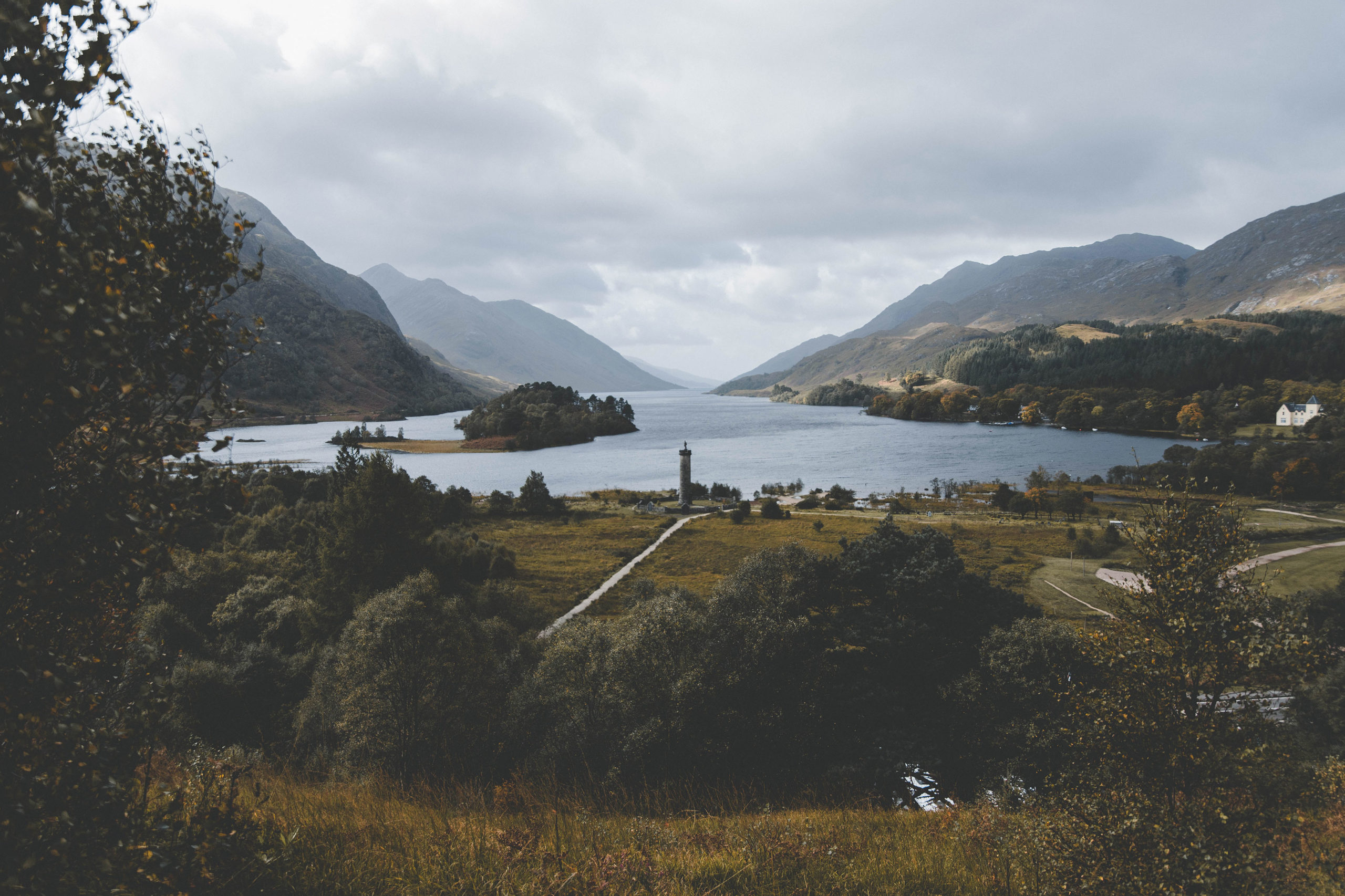 It could be that the road leading to Loch Torridon from the East is just as amazing as any other road in Scotland but we wouldn’t know. Even Glen Coe was veiled by fog and clouds both times we drove through the valley. But we had a streak of luck that day when we were travelling down the A896. Halfway towards Loch Torridon the usually very persistent clouds shifted and let the sunshine through, revealing a sight so beautiful that we had to stop the car to properly stare at the scene opening up in front of us. 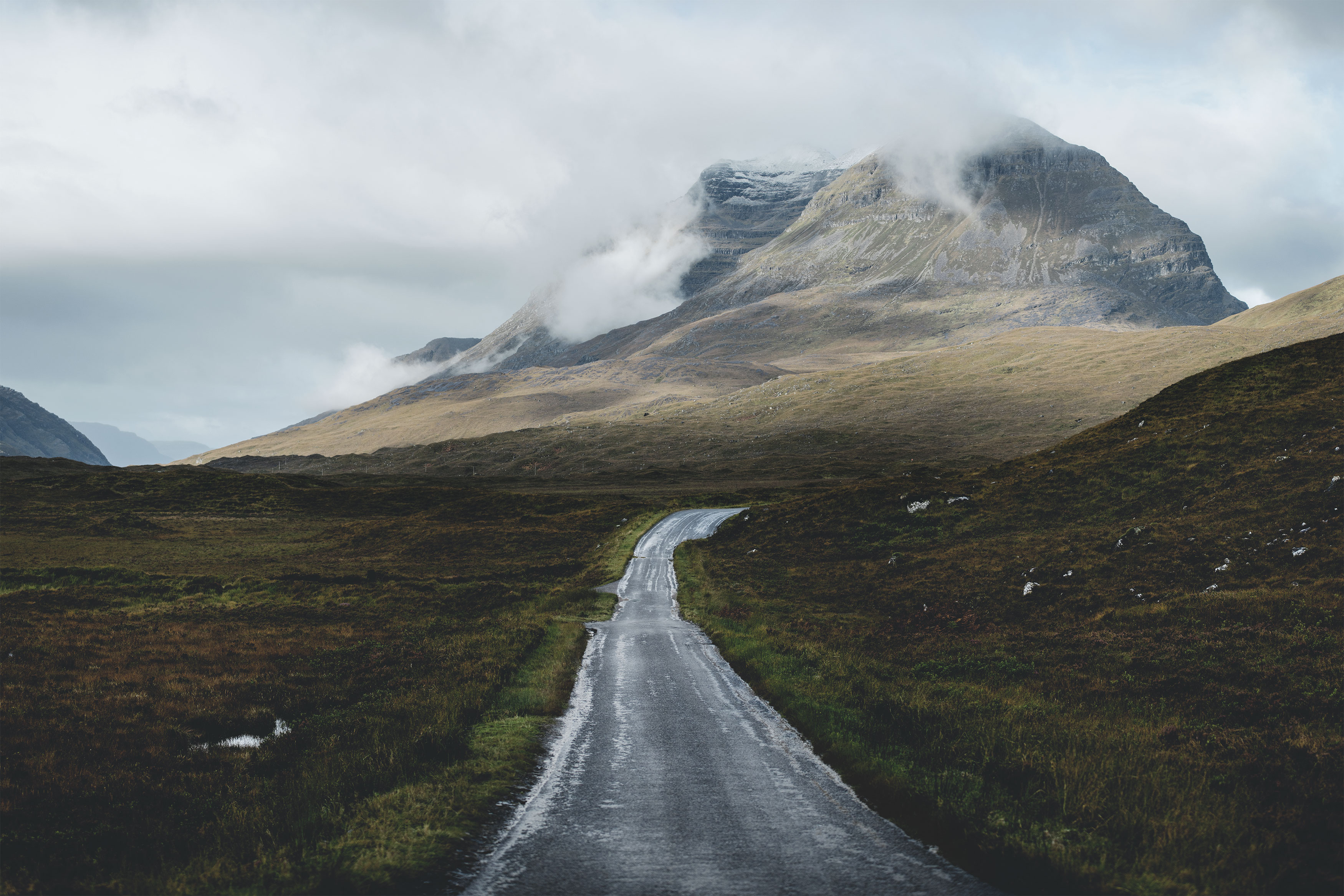 Fairy Glen is a strangely enchanting place and aptly named. Entering the little valley is like leaving what is normal behind and stepping into a world that was shaped by some other force than nature. Hillocks of different sizes spring out of the ground on each side of the road and invite you to go on a stroll among them. With a little imagination those hillocks might as well be the dwellings of fairies and goblins. If you’re travelling the Western side of the Isle of Skye and looking for some magic, this spot is well worth a visit and it’s only a short way from the main road. 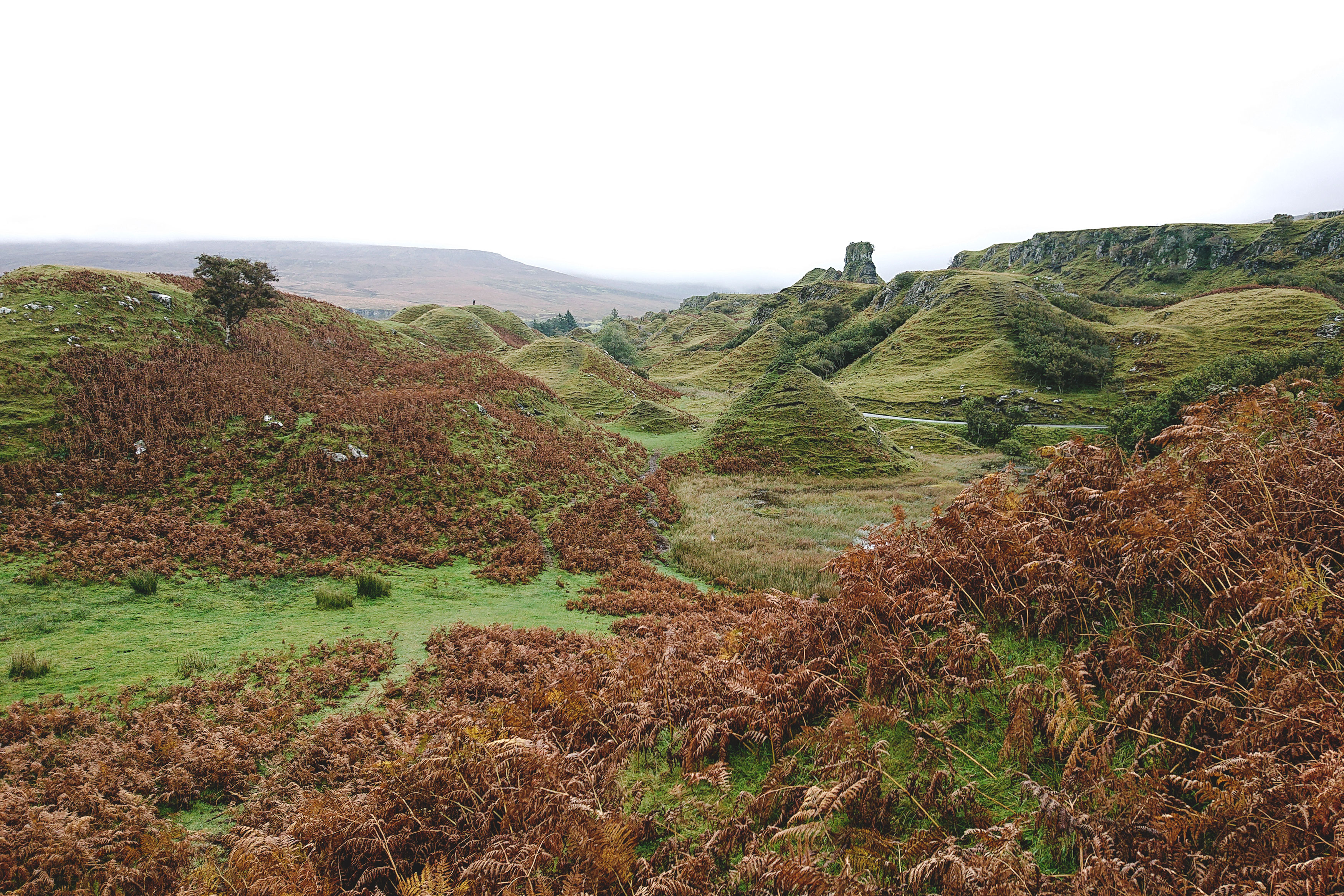 They just can’t be concealed. Even the heaviest of rains or most impenetrable of fogs wouldn’t be capable of hiding Scottish sheep from view because they are simply everywhere! Wearing their woolly jumpers they leap across gravel roads and lie comfortably on meadows, always watching you suspiciously while chewing on some grass. 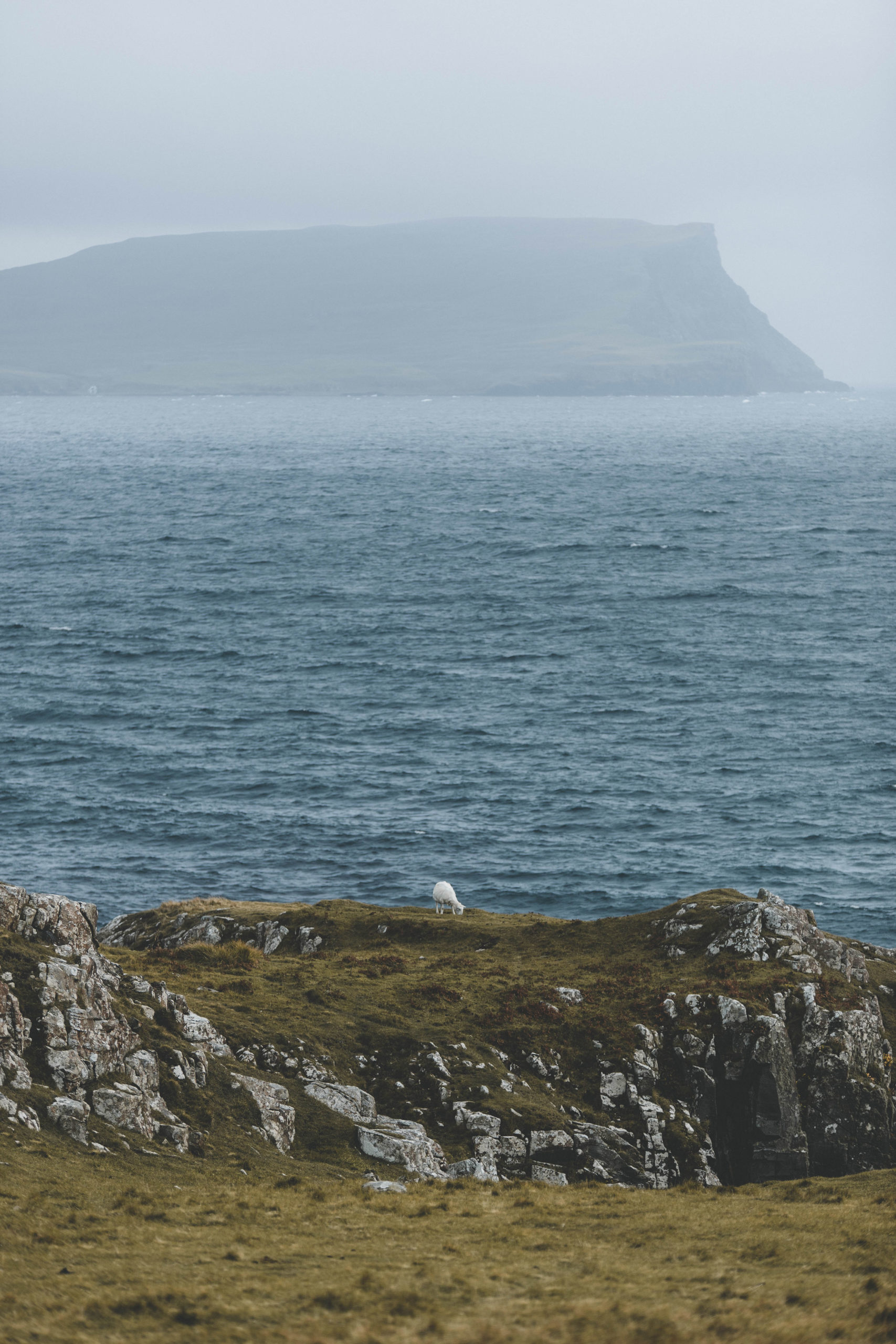 I guess at some point Philipp and me will just have to return to Scotland because I’d really like to go tramping a lot more, and I believe that behind that thick veil of rain and clouds Scotland must be breathtaking! What we saw now was but a taste of the beauty that must reside all around the country.